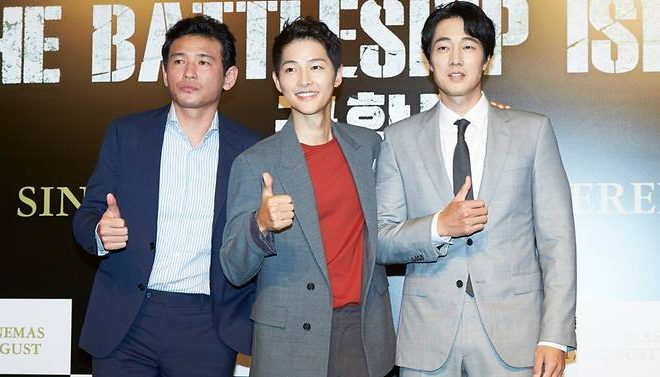 “It Would Be Challenging”: Song Joong Ki On Working With Song Hye Kyo Again

Would you want to see Song Joong Ki and Song Hye Kyo collaborate together again?

On August 8, Song Joong Ki and his co-stars Hwang Jung-min, So Ji-sub, and director Ryoo Seung-wan were in Singapore to promote their latest war film The Battleship Island.

At a press conference in Marina Bay Sands, Song Joong Ki answered questions from the media. One question that sparked the most interest was when he was asked if there would be any future collaboration with his wife-to-be Song Hye Kyo.

To this, Song Joong Ki replied, “Working with Song Hye Kyo for future collaborations, that’s something I would have to give a little more thought to, because I feel that it would be challenging.”

This gives a strong hint that seeing the couple collaborating together on screen might not happen ever again.

He further added, “Work is work, so it may be a little tough to be on the same production”, suggesting that he wants to draw a clear line between his career and personal life.

Hellokpop, as an independent Korean entertainment news website (without influence from any agency or corporation), we need your support! If you have enjoyed our work, consider to support us with a one-time or recurring donation from as low as US$5 to keep our site going! Donate securely below via Stripe, Paypal, Apple Pay or Google Wallet.
205
SHARES
FacebookTwitter
SubscribeGoogleWhatsappPinterestDiggRedditStumbleuponVkWeiboPocketTumblrMailMeneameOdnoklassniki
Related ItemsSingaporeSong Hye KyoSong Joong Kithe battleship island
← Previous Story BTS Enters The List Of Music Americans Love, Together With Future, Rihanna, Lady Gaga And More
Next Story → Park Bo Young’s Cute Brother-In-Law Brought Her Life-Sized Standee Home Because Of The Cold Weather