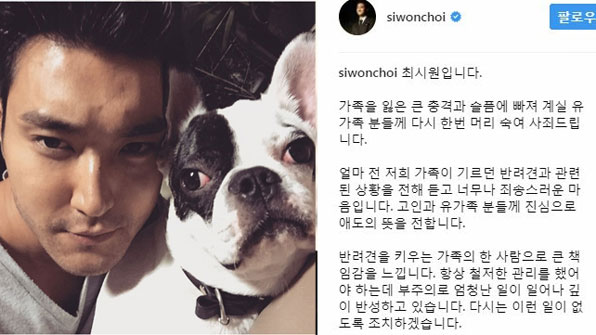 It seems like Choi Siwon’s pet dog is having some other effects on his life too.

Recently, the accident that the pet dog of Super Junior’s Siwon causing death to a neighboring woman has been gathering much attention from public and media.

Due to the shocking accident, the singer was even asked to drop out of his new drama titled Revolutionary Love. It is reported that the heartthrob also decided to sit out from Super Junior’s recent fan event, which took place on October 23 and 24 in Japan.

On October 24, according to a local outlet, one of Choi’s colleagues revealed that the idol was even bitten by his own pet when he was on his military leave. He said: “Choi Siwon went on leave and when he returned, he had a band-aid on his nose. He said his dog had bitten him.”

During his military service, the Super Junior member was usually the host of police ambassador’s concerts. However due to his facial injury caused by his dog, the idol was not able to participate the event for a month. After that, he had to make an apology to other colleagues for affecting the event’s schedule. Moreover, during that time, Choi’s position in performances was also changed from the center to the edge of the stage.