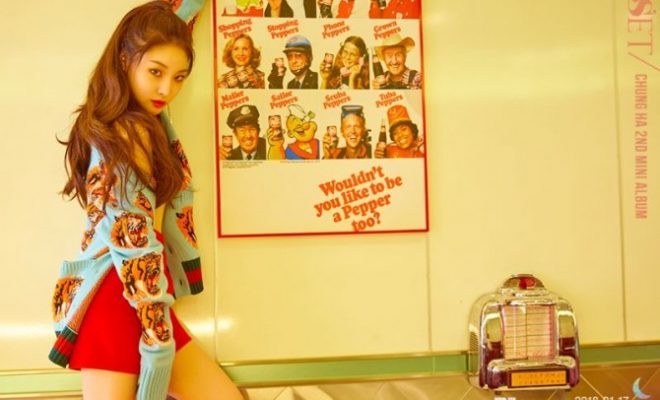 Chung Ha will celebrate her birthday with fans this February.

As stated by MNH Entertainment, the former I.O.I member is set to embark on her first ever local fan meeting dubbed Chung Ha’ppy Birthday Party & Fanmeeting.

The label revealed: “Chung Ha is excited to see her fans at the fan meeting because it’s her first fan meeting after her solo debut. We ask for your support as we will celebrate Chung Ha’s 23rd birthday during the fan meeting as well.”

The event, which follows Chung Ha’s first fan meeting in Taipei, Taiwan, will take place at 6 p.m.(KST) on February 3, at Yes 24 Live Hall in Gwangjin-gu, Seoul.

During the coming fan event, the talented soloist is scheduled to showcase various songs such as her latest title track “Roller Coaster,” “Why Don’t You Know,” and others.

She also prepared many games to interact with fans, a Q&A session and a “Make a Wish” segment.

In related news, Chung Ha debuted as a soloist last June with her first mini album titled Hands on Me. She has recently made a comeback with the second mini album Offset this January.

We need your support! If you have enjoyed our work, consider to support us with a one-time or recurring donation from as low as US$5 to keep our site going! Donate securely below via Stripe, Paypal, Apple Pay or Google Wallet.
FacebookTwitter
SubscribeGoogleWhatsappPinterestDiggRedditStumbleuponVkWeiboPocketTumblrMailMeneameOdnoklassniki
Related ItemsChung HaChung Ha’ppy Birthday Party & FanmeetingFan meetingHands on MeI.O.IOffsetRoller CoastersoloistWhy Don't You Know
← Previous Story SHINee’s Jonghyun Is Forever “Shining” In Posthumous New MV
Next Story → Song Seung Heon Confirms Break-up With Liu Yi Fei