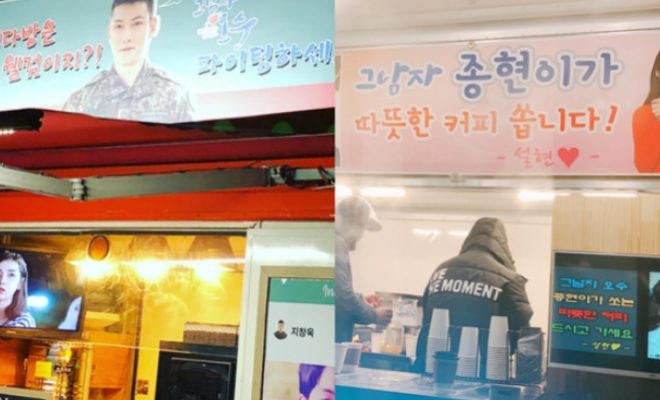 CNBLUE’s Lee Jong Hyun expressed his gratitude to his friends who generously showed their support for his new drama That Man Oh Soo.

In his Instagram posts, the singer-actor revealed the number of food support he received from his celebrity friends at the set of his drama. The generous donors include label mates Jung Hye Sung and AOA’s Seolhyun, actors Ji Chang Wook and Choi Tae Joon, and EXO’s Chanyeol.

“Thank you very much for supporting me,” Jong Hyun wrote along with a photo of himself posing with a coffee cup. He also uploaded photos of the food support which bore supportive messages for him.

Choi Tae Joon and Chan Yeol had fun with their food truck by including funny pictures of Jong Hyun on the banners including his graduation photo. The banners also read, “Jong Hyun hyung, have strength!”

Jong Hyun reciprocated the thoughtful gesture with photos of the food truck and the message, “Thanks a lot! It was really funny!” He ended his caption with “Choi Tae Joon, Park Chan Yeol, mansae!”

The CNBLUE member is currently playing the lead role in OCN’s That Man Oh Soo alongside Kim So Eun. The first episode of the fantasy-romance television series aired on 5 March 2018. It is expected to end its 16-episode run in April.