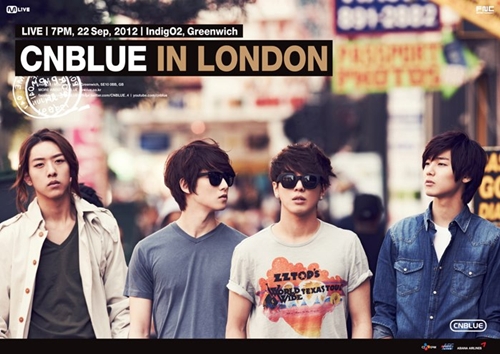 CNBLUE to hold concert in London

CNBLUE have revealed that they will hold their first ever showcase in London, CNBLUE LIVE IN LONDON, this coming September. The concert will be held at IndigO2 in Greenwich on September 22, 2012 at 7PM.

The ticket release date as well as more details will be released on a later note. Stay tuned to hellokpop!

Hellokpop, as an independent Korean entertainment news website (without influence from any agency or corporation), we need your support! If you have enjoyed our work, consider to support us with a one-time or recurring donation from as low as US$5 to keep our site going! Donate securely below via Stripe, Paypal, Apple Pay or Google Wallet.
FacebookTwitter
SubscribeGoogleWhatsappPinterestDiggRedditStumbleuponVkWeiboPocketTumblrMailMeneameOdnoklassniki
Related ItemsCNBLUECNBLUE LIVE IN LONDONconcertLondon
← Previous Story KARA releases music video teaser for ‘PANDORA’
Next Story → Tiger JK and Yoon Mi-rae meet with Dr. Dre, promise future collaboration