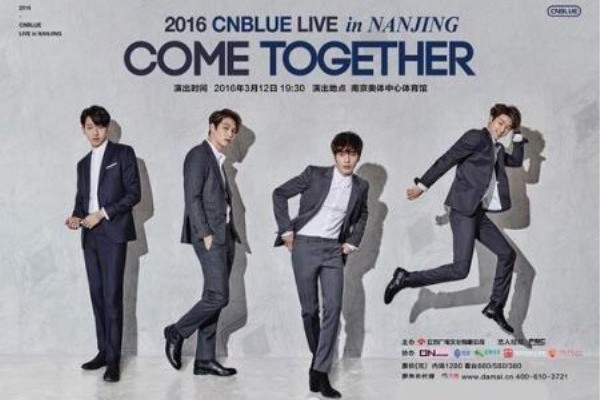 Poster of CNBLUE concert in Nanjing

CNBLUE To Kick Off Asian Tour Concert ‘Come Together’

CNBLUE is getting ready for its coming Asian tour concert.

Ahead of the tour, the boy band will meet its fans on January 23 at Beijing Workers’ Sports Complex, and then perform shows in Taipei and Guangzhou on February 19 to 20 and 27, respectively.

The concert titled  2016 CNBLUE Live Nanjing Come Together in China will be held on March 12, introducing 2gether tracks, which were released on last September. Known as multi-talented artist, CNBLUE always tries the best to create its own unique and outstanding colors.

The idol group is set to kick off its Asian tour on October 2 at Shanghai Mercedes-Benz Arena, and wrap up on October 25 at Jamsil Gymnasium, Seoul.

Hellokpop, as an independent Korean entertainment news website (without influence from any agency or corporation), we need your support! If you have enjoyed our work, consider to support us with a one-time or recurring donation from as low as US$5 to keep our site going! Donate securely below via Stripe, Paypal, Apple Pay or Google Wallet.
FacebookTwitter
SubscribeGoogleWhatsappPinterestDiggRedditStumbleuponVkWeiboPocketTumblrMailMeneameOdnoklassniki
Related ItemsCNBLUEJung Yong HwaLee Jong Hyun
← Previous Story GFRIEND Returns With “Rough” MV
Next Story → BIGFLO’s Jungkyun To Debut In Japan Next Month