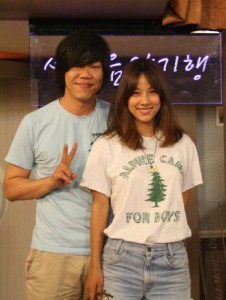 Couple Lee Hyori and Lee Sang Soon recently went on a holiday overseas with their friends.

A representative of Lee Hyori’s company stated on the 18th of July, “they took a 5 day, 4 night holiday at the end of June to visit Palau Islands. They did not go alone, but were accompanied by their friends.”

Lee Hyori and Lee Sang Soon were both modestly dressed during their Palau holiday, and enjoyed their holiday playing water sports. Tourists said that the couple accepted requests for signatures happily and did not seem to pay much attention to their surroundings.

Lee Sang Soon and Lee Hyori had their relationship made public in November last year, and Lee Hyori revealed details on her boyfriend and their love story on KBS2’s Happy Together 3 in March and SBS’s Healing Camp in April. She proceeded with confidence about her relationship, even putting up a collaborated performance with Lee Sang Soon on SBS’s music programme You and I for the broadcast on the 13th of May.

Hellokpop, as an independent Korean entertainment news website (without influence from any agency or corporation), we need your support! If you have enjoyed our work, consider to support us with a one-time or recurring donation from as low as US$5 to keep our site going! Donate securely below via Stripe, Paypal, Apple Pay or Google Wallet.
FacebookTwitter
SubscribeGoogleWhatsappPinterestDiggRedditStumbleuponVkWeiboPocketTumblrMailMeneameOdnoklassniki
Related ItemsHappy Together 3Healing CampKBS2Lee HyoriLee Sang SoonSBSYou and I
← Previous Story A-JAX confirms fanclub to be ‘A-LIGHT’
Next Story → Yedang Entertainment’s C-Clown releases their MV for ‘SOLO’