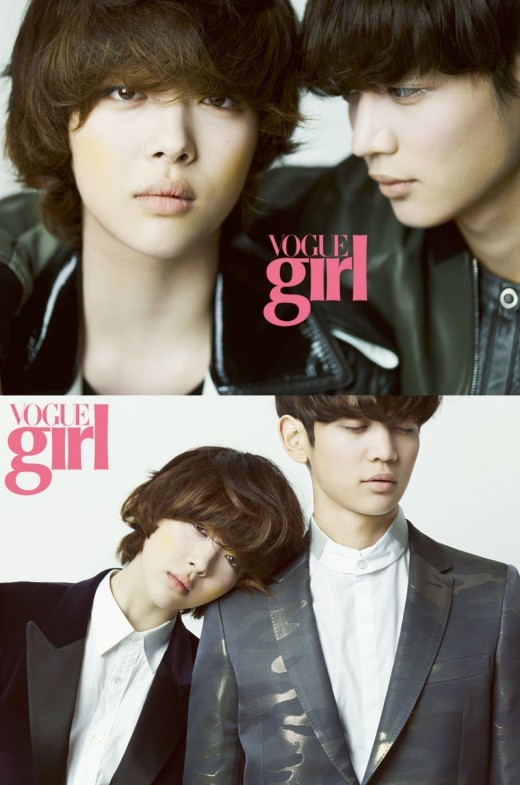 f(x)’s Sulli and SHINee’s Minho, the two leads from SBS’s ‘To the Beautiful You’, which is scheduled to air starting on the 15th of August, have completed a photo shoot for fashion magazine ‘Vogue Girl’.

Sulli had cut off her long tresses in order to play the role of a cross-dressing female high school student. Displaying her exceptional boyish charms alongside Minho’s, they produce the ultimate image of beautiful young boys together with their cool expressions.

‘To the Beautiful You’ is titled after the original bestselling comic of the same name, drawing from the same source that made successful the Japanese drama production ‘Hanazakari no Kimitachi e‘ .  As PD of ‘Boys Over Flowers’ Jun Ki Sang is directing this drama, expectations that this drama would be even better than the aforementioned have been on the rise. Furthermore, fans of the original comics have acknowledged that Sulli’s and Minho’s visuals exceed 100% in terms of compatibility, amassing even more interest in the drama.

In the ‘Vogue Girl’ interview, Sulli expressed that she “hesitated about taking on the role, but eventually thought to [her]self that ‘this [was] a role [she] could do well in’”. Minho also revealed his take on his role, saying “I will show a different self-obsessed character from the one played by Japan’s Oguri Shun”.

Sulli’s and Minho’s couple photo shoot will be published in the August edition of ‘Vogue Girl’.

Is your excitement over the upcoming drama now too hard to contain?