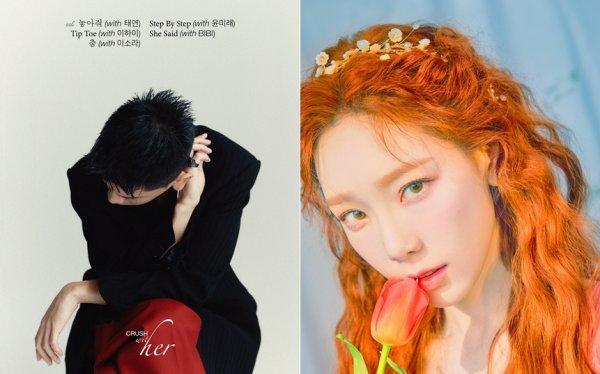 After their first collaboration in 2016, Crush and Taeyeon will reunite once more for a track on Crush’s upcoming album, with HER!

Crush’s label, P NATION, announced to fans through its official SNS account that Taeyeon will feature on the singer’s comeback album, titled with HER.

This marks the pair’s official reunion since they collaborated on Crush’s track “Don’t Forget” back in 2016. The pair first amazed fans with their fitting musical synergy, sweeping the number one place across multiple music charts and declared as the best music combination by listeners.

Taeyeon will now participate in Crush’s music once more, featuring on the title song called “Let Me Go” of Crush’s upcoming album. The duo plan to recreate the same emotions of “Don’t Forget” in the new track. While still embodying the familiar emotions of their prior project, Crush and Taeyeon will captivate listeners with a deeper soulful track, and an even more stunning harmony than before.

While fans can look forward to Crush and Taeyeon’s track, the male singer also raised expectations for his album by revealing the other featured artists for his EP, with HER. Other collaborating artists include Sora Lee, Mirae Yoon, Lee Hi, and BIBI. Fans are already impressed by the stacked lineup which includes incredibly talented women, and look forward to their participation within the same body of work.

Crush’s new EP, with HER, releases across various online music websites on October 20 at 6 pm KST.