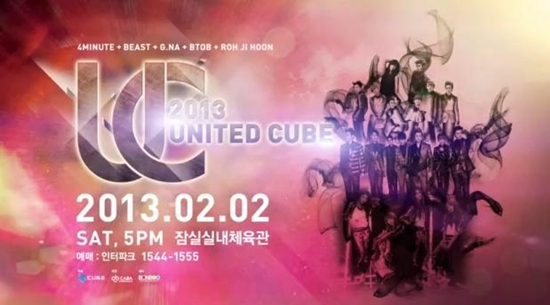 Cube Entertainment has released a short advertisement video to promote its upcoming UNITED CUBE CONCERT tour in Seoul. The video displays various clips of the concert as well as introducing the agency’s artists.

The first artist to be presented is BEAST and the video displays a short segment of the group’s latest title track Beautiful Night. Next comes the hot girl group 4Minute with its track Volume Up. Following 4Minute’s introduction is solo singer G.NA with clips from her track 2Hot. Next to be presented is the agency’s latest rookie artists BTOB with WOW and Roh Ji Hoon with Punishment.

The UNITED CUBE CONCERT will be held in Nanjing, China on January 26, 2013, in Seoul, Korea on February 2, and in Yokohama, Japan on February 21.

Check out the teaser video below: