After all these days of waiting, Super Junior’s Kyuhyun finally released he’s mini Album ‘At Gwanghwamun’! There are a total of 7 songs in the mini album with “My thoughts, your memories” which showoffs Kyuhyun’s talent in composing the song. What’s more exciting is that the lyrics of the song is written by TVXQ’s Shim Changmin! It is a song with beautiful melody and touching lyrics. Hurry up and go check out his mini album for more amazing songs!

Ex-EXO member Kris (Wu YiFAN), released his Chinese music video “There is a Place” yesterday. The song “There is a Place” is the OST for the movie “Somewhere only we know” which Kris himself is starring in. Kris helped in the  production of the song;  by producing the music and writing the lyrics. The Movie is scheduled to show in February 2015.

Starship Entertainment and Mnet will be holding survival show named “NO.MERCY”. 12 trainees from Starship Entertainment will be competing in the show in order to create a new boy group. The boys will receive mentoring from some of the Korea’s best musicians and have collaboration on stage. The show is planned to air on December 10th and last for 10 weeks. 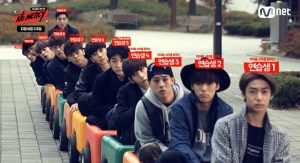 This has been Thursday’s HelloKpop express news update. Follow Asian Pop Radio on Facebook and check out hellokpop for more kpop updates.