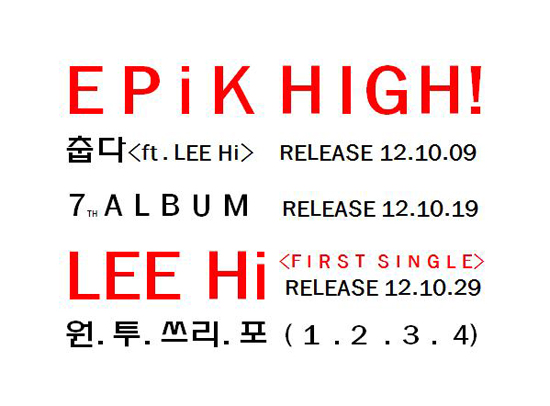 Epik High and Lee Hi to work together in October

The hip hop group, Epik High, and Lee Hi from the Kpop Star SBS Audition will make their comeback and debut respectively in October.

On September 28, YG officially published their comeback details through their blog. According to the announcement, both of them will show their performance right after the release of the new Epik High song, It’s Cold.

This song will take the unpredicted participation of Lee Hi. The public have a high expectation on the results of this combination. Epik High’s last release was in 2009 with their sixth album, e.

After the enlistment of DJ Tukutz and Mithra, their activities were interrupted and Tablo made an individual contract with YG Entertainment. Since then, he has made his solo debut. Hence, people were afraid that this signified the end of the group. But, Epik High was reunited again in YG Entertainment having been working together since July. It seems that even before the announcement of their official contract, the group have worked on the new album so as to show to the fans their original and unique music.

Also, Lee Hi will supposedly debut on October 29 with the song, One, Two, Three, Four. YG Entertainment chairman Yang Hyun Suk picked her on the end of the first season of Kpop Star Audition calling her, “The winner of my heart”. And since May, she has been preparing for her debut.

The finale of the combination of her astonishing talent and YG’s producing have now become the centre of attention.