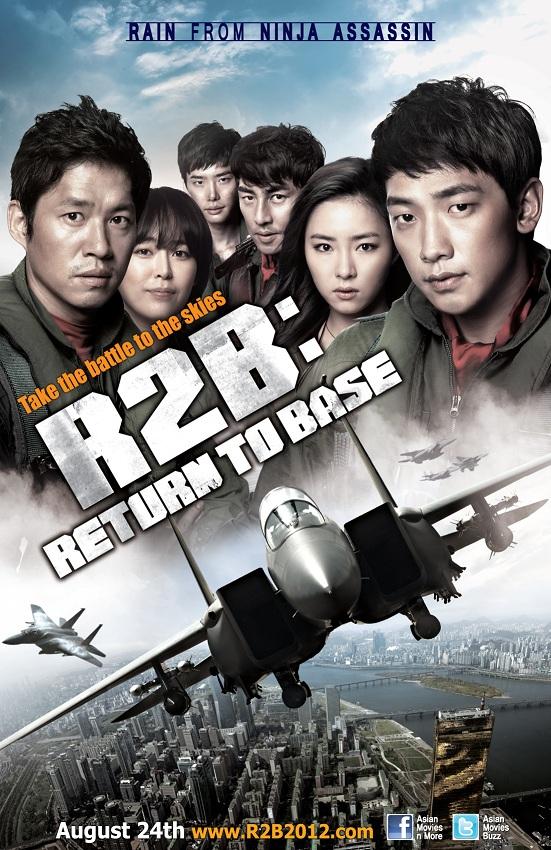 R2B: Return to Base Movie Review

R2B: Return to Base has been making its way around the globe since it’s summer release in Korea.  Before its premiere in the U.S., hellokpop was fortunate enough to be invited to attend a special screening of the film, which stars Rain, as well as many other top Korean actors, such as Shin Se-Kyung, Yu Jun-Sang, Kim Sung-Soo, Lee Ha-Na, and Lee Jong-Suk.

R2B: Return to Base, directed by Kim Dong-Won, is a story about South Korean elite Air Force pilot Tae-hun (Rain), who finds himself suddenly kicked out of South Korea’s prestigious Black Eagle aerobatic team and demoted into a regular combat unit after he performs a cocky and dangerous maneuver during an air show demonstration.  On the first day of his transfer to F15K, he meets Cheol-hui (Yu Jun-Sang), the unit’s top gun.  Tae-hun’s free-spiritedness and Cheol-hui’s rule-abiding ways come into conflict almost immediately.  Meanwhile, Tae-hun befriends the rest of the members on his new squad, including Se-Yeong (Shin Se-Kyung), with whom he finds himself falling in love.

Tae-hun continues with his hotdog antics until, one day, a reconnaissance mission for the squad turns into an unexpected incident, ending in the untimely death of one teammate and the disappearance behind enemy lines of another.  The unit receives an emergency announcement that an unidentified combat plane has entered South Korean airspace, and Tae-hun and Cheol-hui are forced to set aside their disagreements and lead their members to stop the impending war and rescue their missing comrade.

In my opinion, R2B: Return to Base was an entertaining movie.  There was never a moment where I got bored with the story. I went through so many emotions during the 113 minute screening. I was awed as I watched the pilots perform difficult maneuvers (think USA’s Blue Angels).  I felt sadness as a beloved character perished during a mission.  I laughed as I watched Jung Ji-Hoon try various antics in order to win Se-Yeong over.  The only thing a bit hard to follow were the subplots of the different characters, and the ways they interacted with each other. However, if you like aerial action movies, then you should definitely check out this amazing movie!

The film has been sold to over 30 countries, including the U.K., France, Germany, Indonesia, India, Turkey and Mongolia, and is still making its way around the world.  It is currently playing in Indonesia, so I do not want to give any spoilers away, but I highly recommend that you go see this movie if you are close to any of the theaters where it is still showing.  Check out the English-subtitled trailer below!