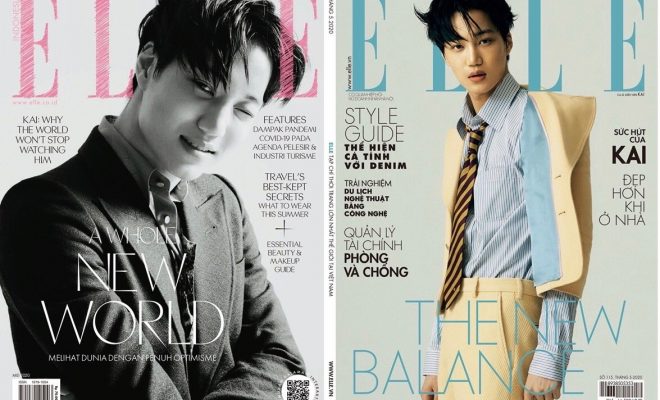 By Yann | May 2, 2020
94
SHARES
FacebookTwitter
SubscribeGoogleWhatsappPinterestDiggRedditStumbleuponVkWeiboPocketTumblrMailMeneameOdnoklassniki

EXO’s Kai once again proved his unrivaled influence in the fashion world!

After gracing the cover of ELLE Korea’s April 2020 issue, EXO’s Kai followed up in showing his unparalleled presence in the fashion industry immediately by simultaneously sweeping the covers for the May 2020 editions of ELLE in three more countries.

The EXO member continues to display his popularity in the fashion industry as a modeling icon by being the face of ELLE Magazine’s latest issues in Indonesia, Thailand, and Vietnam.

In the released photos of his three magazine covers, Kai presented the 2020 spring/summer collection look of Italian luxury brand Gucci. Sporting a perfect fit, the globally-acclaimed idol showed his infinite charms as a fashion icon to exude a lovely atmosphere.

In line with this, ELLE Indonesia shared a shower of praises for the idol as well as the wonderful news of their upcoming magazine issue already being sold out within 24 hours of its pre-order launch thanks to Kai’s power.

“Korean superstar Kai, who leads the trend, decorated the cover of ELLE Indonesia. When Kai decorated our cover in 2018, the issue sold out immediately in two days—the first time in the history of ELLE Indonesia. This time, the response to his cover is huge once again. The May issue is already sold out and we are very surprised by its popularity,” they said, noting the high interest from the local scene towards Kai.

First time ever we opened a #PreOrder process to purchase the magazine, thus it has sold out in less than 24 hours.

In that event, we have closed our online Pre-Order for #ELLE Indonesia May 2020 issue. Thank you all for your continued support and enthusiasm! ??❤ pic.twitter.com/763dzVgnIu

Last September 2019, Kai was announced as the first and only Korean selected as a male global ambassador for Gucci. Proving his remarkable status in the world of fashion as well, he was the only K-Pop artist included on “The 50 Best-Dressed Men of 2020” list by British fashion magazine GQ.