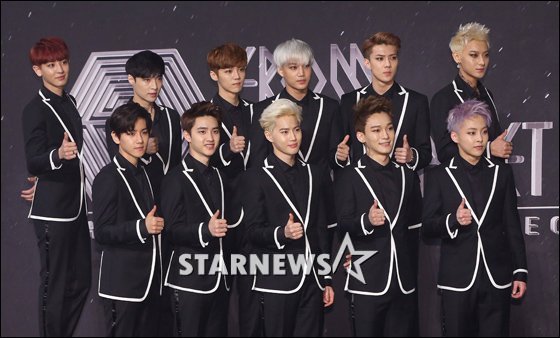 By Phillip | May 25, 2014
FacebookTwitter
SubscribeGoogleWhatsappPinterestDiggRedditStumbleuponVkWeiboPocketTumblrMailMeneameOdnoklassniki

EXO has spoken out about Kris’s lawsuit for the first time in Korea, since the legal battle began on May 15.

The ‘Overdose’ singers held a press conference just before their last ‘EXO FROM. EXOPLANET #1 – THE LOST PLANET’ concert date in Korea today and discussed about Kris’s lawsuit.

EXO-M member Chen used a metaphor to describe the incident: “Just like how rain hardens the soil, our member’s teamwork has also become stronger.”

Lay added that the group were upset when they were doing interviews about the lawsuit in China last week.

“There was a lot of disappointment and we were hurt. Due to rumors, EXO fans became divided and I’m upset there was this misunderstanding,”

“I hope there aren’t situations like this in the future and I want EXO to become one.”

Luhan explained to the press that Kris’s decision to file a lawsuit against SM Entertainment last week came a shock, and the group and staff members had to change the performances last minute before the concert.

Chanyeol described the situation as “chaotic and confusing” at first but said he worried most about the performances for fans.

“Because we practiced so much and had more rehearsals, our bond grew stronger. I think that is how we created this perfect performance,”

“I can confidently say that you will be able to feel the quality of our performance at today’s concert.” Chanyeol said.

EXO-K leader Suho said: “At that moment, the biggest feeling was confusion and because the concert was so close, it was psychologically and physically very difficult and painful.”

Meanwhile, Baekhyun acknowledged the hard work their staff put into making the concert go ahead without Kris.

Finishing up their three date concert in Korea, leader Suho said the group had waited a long time to hold their first solo concert called ‘EXO FROM. EXOPLANET #1 – THE LOST PLANET’.

“I’m very nervous and excited, and because it’s the last day, I’m also very happy. It’s such an honor to stand on the stage that our seniors have stood on.” He said.

Chanyeol said that he feels more comfortable on stage now since it’s their last date in Korea, while Xiumin said he was happy to  “fulfil one of EXO’s dreams of holding a concert.”

EXO’s first solo concert, ‘EXO FROM. EXOPLANET #1 – THE LOST PLANET’ sold out in 1.47 seconds and will be heading to Hong Kong next month.