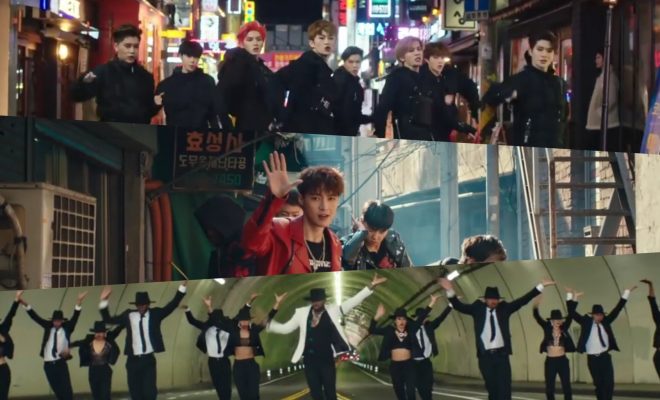 Screen Capture from Let's Shut Up and Dance MV

EXO’s Lay Zhang, NCT 127, And Jason Derulo Are The Greatest Dancers In “Let’s Shut Up And Dance” MV

Let’s shut up and dance with Lay Zhang, NCT 127, and Jason Derulo!

The highly anticipated music video of “Let’s Shut Up and Dance” starring EXO’s Lay Zhang, NCT 127, and Jason Derulo was finally unveiled, stunning viewers with its well-crafted choreography and strong and polished dance moves that surely made everyone shut up and watch the ensemble dance.

The song was released on February 22 local time as the first runner of the planned four-song EP set of the Global Michael Jackson Tribute project. It is now available for streaming on various music sites.

Jason Derulo took charge in penning the track. It features the voices of Lay Zhang and NCT 127’s Mark, together with the American singer-songwriter. Filmmaker Daniel Russell directed the music video. The MV is available through 1theK and Jason Derulo’s respective channels.

Netizens showered the EXO member and NCT 127 members with praises. Many shared their pride in seeing their favorite idols be part of the tribute project.

Overall, “Let’s Shut Up and Dance” received favorable responses especially for the high-quality dance performance each artist showcased in the music video. However, a number of netizens expressed dissatisfaction with the song lyrics which they believe did not give much justice to the artistry and legacy of Michael Jackson as a musician.

Meanwhile, the Global Michael Jackson Tribute project aims to celebrate the 60th birthday of the King of Pop. It also coincides with the tenth year anniversary of his death. Through various release, it seeks to pay homage to the singer, while uniting people and encouraging diversity and inclusivity.

Aside from four singles, the tribute project will also include a special concert and feature films.