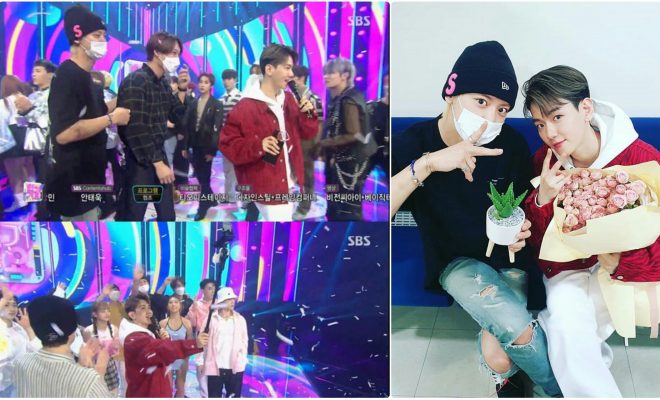 The members of EXO are always sweetly supportive of each other, and we’ve got another moment showcasing that fact again!

Chen, Chanyeol, Kai, and Sehun—aka the members of EXO who haven’t enlisted yet—gathered on the stage of SBS’ music show Inkigayo to join Baekhyun and surprise EXO-Ls! 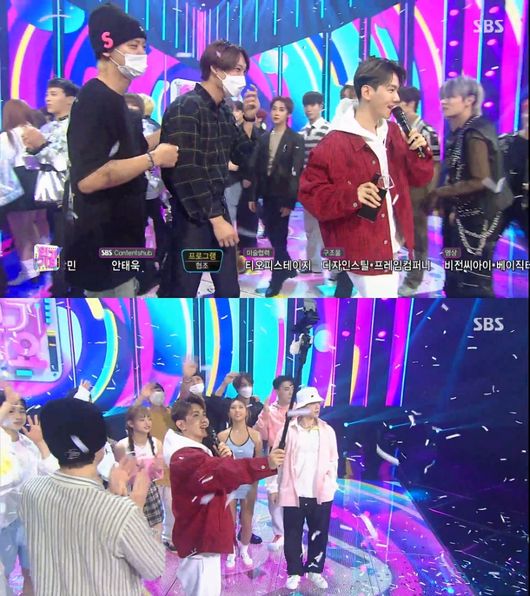 Amassing trophies right away as he began his official promotion week for his newest mini-album Delight and its title track “Candy”, Baekhyun sweetly scored his third music show win during the June 7 episode of SBS’ Inkigayo.

The EXO member went up against OH MY GIRL and Bolbbalgan4 for the first place, and he was able to successfully best them with his score of 7767 versus their 6190 and 5552 total points, respectively.

Upon receiving the trophy, Baekhyun shared his gratitude to fans for their avid support. “Thank you EXO-L. I received so much love as soon as the mini-album was released, which is why I am spending my days happily. I will repay you with good performances,” he said.

As he delivered his acceptance speech, fans got the sweet surprise of EXO members climbing up the stage to celebrate Baekhyun’s win. Wearing hats and masks, Chen, Chanyeol, Kai, and Sehun all celebrated their groupmate’s first place success and rejoiced together.

Wanting to take a picture of the moment, Baekhyun then showed up with a selfie stick and gathered his groupmates on stage. Aside from this scene which was broadcasted on air, Chanyeol also posted a photo of him together with Baekhyun backstage.

With EXO-Ls responding with much surprise to the group’s unexpected appearance on Inkigayo, the names of EXO’s members who were in attendance had trended worldwide on Twitter right away, along with the celebratory messages for #Candy3rdWin.

Additionally, among the highest trending keywords from the event was “Jongdae”—aka Chen’s real name. Sending lots of love, fans noted that it was his first television appearance since announcing his decision to get married.