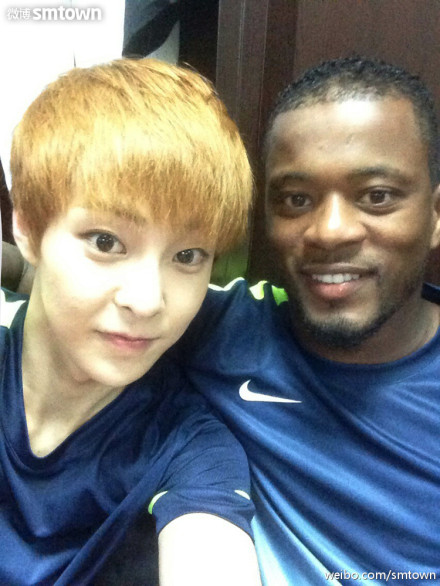 What does EXO-M’s Xiumin have in common with Manchester United player Patrice Evra?

A definite love and passion for football, of course!

The two joined forces through their participation in the third annual installment of the Asian Dream Cup, which is a charity football game that strives to promote football (or soccer) throughout South East Asia. The event was held in Shanghai, China at the Hongkou Football Stadium on the 23rd of June. The friendly duo were both players on Park Ji Sung’s Korea team, who is also a close friend of Evra’s as they used to play for Manchester United together.  For fans who may not know, EXO-M’s Xiumin and Luhan are avid fans of football and are players of the sport itself.

An update on SMTOWN’s official Weibo shows a selca of Xiumin and Evra smiling brightly together in their football jerseys, with the statement below: (trans)

‘Although yesterday’s weather wasn’t very good, yet, still a lot of people turned up to support SHINee’s Minho and EXO-M, thank you everybody. Let’s present everyone with a selca featuring Xiumin and Evra (who is from Manchester United) from the Asian Dream Cup!’

Meanwhile, PSY and EXO-M entertained those present at the stadium with stellar performances, with PSY performing his worldwide mega smash hits Gangnam Style and Gentleman during half time, while EXO-M presented Wolf and History to the roaring crowd at the end of the match.

For readers who have watched the video of the friendly match, how well do you think that your favorite idols and celebrities fared in the sport?