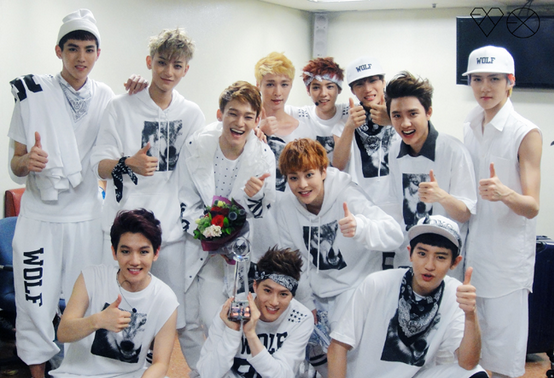 EXO, who have recently acquired their first triple win on various music programs with Wolf, have released a behind-the-scenes video of the boys’ reactions after their very first win on KBS’ Music Bank.

The video, uploaded on SMTown’s official YouTube in conjunction with EXO’s achievement of receiving over 5.5 million views for the music video of Wolf (Korean Version), shows the boys on stage celebrating their win and encore stage before retreating backstage, where the members were thanking all the staff and fans present profusely for their support and encouragement. Several members like Lay, Kai and Suho were overcome with tears- nevertheless, all the EXO members were rejoicing about the first win of their career. SHINee’s Taemin makes a special appearance in the video as well, congratulating and celebrating his junior’s win.

Check out the heartwarming video of EXO below!