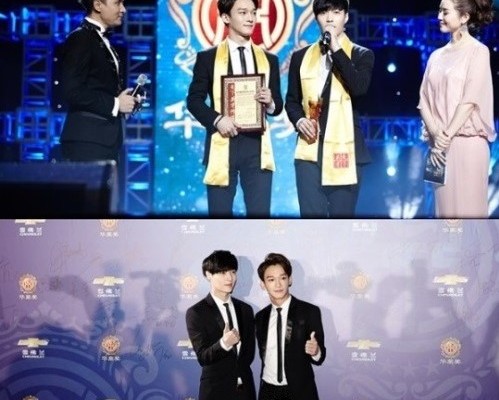 The Huading Awards is a reputable entertainment award ceremony which is held every year since 2007. This year’s 14th Huading Awards took place at the Expo Center in Shanghai, China.

As representatives of the group, the two EXO members, Chen and Ray, expressed the honor to snag the precious award, saying: “It is an honor to receive such a big award, thank you. (We) will try to become an EXO befitting the award.”

Meanwhile, the year 2014 has witnessed vast wins of EXO, as the group swept four major awards; Album of the Year, Best Male Group, Artist of the Year in Asia and Best Asian Style award, at the 2014 MAMA in Hong Kong.

Hellokpop, as an independent Korean entertainment news website (without influence from any agency or corporation), we need your support! If you have enjoyed our work, consider to support us with a one-time or recurring donation from as low as US$5 to keep our site going! Donate securely below via Stripe, Paypal, Apple Pay or Google Wallet.
60
SHARES
FacebookTwitter
SubscribeGoogleWhatsappPinterestDiggRedditStumbleuponVkWeiboPocketTumblrMailMeneameOdnoklassniki
Related Items2014 MAMAAlbum of the YearArtist of the Year in AsiaBest Asian StyleBest Male GroupChenEXOHuading AwardsRay
← Previous Story WINNER’s Lee Seung Hoon to opt out of fan meeting in Beijing
Next Story → Kim Woo Bin to Launch Fan Meeting in Shenzhen