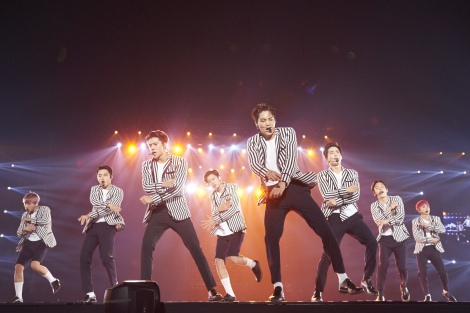 Boy group EXO is currently on tour in Japan as part of its world tour  EXO PLANET #2 – The EXO’luXion.

The boys reached another milestone as they successfully wrapped up their 3-day concert at the Tokyo Dome. They have set a new record as non-Japanese male artists to hold their first concert at the Tokyo Dome with the shortest period of time after only three years and seven months since debut, following American rock band Bon Jovi who previously set the record after 4 years since its debut.

During the concert on the 8th, Baekhyun shared that he was touched when witnessing the venue filled up with 50,000 fans, which was beyond his expectation.

EXO kicked off its tour in Fukuoka from October 31 to November 1, then moved on to the Tokyo Dome on November 6-8, and will wrap up the tour on November 15 with a 3-day concert at the Kyocera Dome.