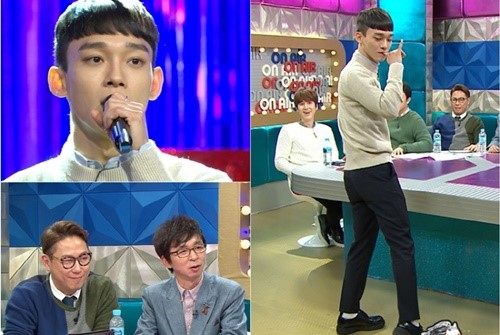 Although ‘Oppa China Style’ is the show’s theme, the guests are all Korean artists, including: Ji Suk Jin, Choi Sung Guk, Chen and Kim Eun Sung.

During the show, Chen constantly made people in the studio surprised by his singing and dancing talents. The star showed off his sweet sentimental voice in an emotional ballad song titled Love Again, with a view to touching Chinese fans’ hearts.

Kyuhyun revealed that at first, EXO’s Suho was selected to join the show. However, the decision was changed to Chen at the last minute.

Right after that, Chen expressed his strong confidence, saying: “This program asks brutal questions, but I can handle it”

The EXO member also made viewers burst into laughter by his sense of humor. He mentioned Super Junior’s Ryeowook’s appearance on the January episode, and considered himself as a part of “Ryeo Line” (the group of people attached to Ryeowook) instead of “Kyu Line”, making Kyuhyun fall into sadness.

The MCs also paid a charming compliment to Chen by saying: “Chen is kind, humble and nice.”

Check out the clips below: