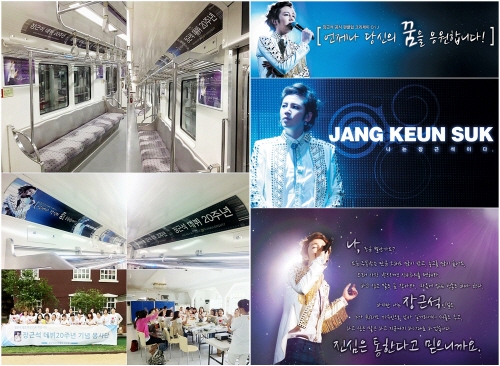 To commemorate Jang Geun Suk‘s 20th anniversary since debut, fans have assembled a special advertisement for the entertainer.

Tree J. Company announced on the September 10 that fans from Jang’s official fan club gifted the entertainer a subway advertisement. It was also reported that Line No. 5 trains were plastered with various photos of Jang.

Aside from acknowledging his 20th year anniversary, the gift was special as it may also serve as a birthday gift to Jang whose birthday falls on September 26. Fans produced four variations of 258 advertisements to promote his anniversary date. The Jang Geun Suk train will run within Seoul up until July 10.

Hellokpop, as an independent Korean entertainment news website (without influence from any agency or corporation), we need your support! If you have enjoyed our work, consider to support us with a one-time or recurring donation from as low as US$5 to keep our site going! Donate securely below via Stripe, Paypal, Apple Pay or Google Wallet.
FacebookTwitter
SubscribeGoogleWhatsappPinterestDiggRedditStumbleuponVkWeiboPocketTumblrMailMeneameOdnoklassniki
Related ItemsJang Geun SukTree J. Company
← Previous Story Prospecs W releases Kim Yuna and Kim Soohyun photo advertisements
Next Story → Ryan Seacrest goes ‘Gangnam Style’ with Psy on radio show ‘On Air’