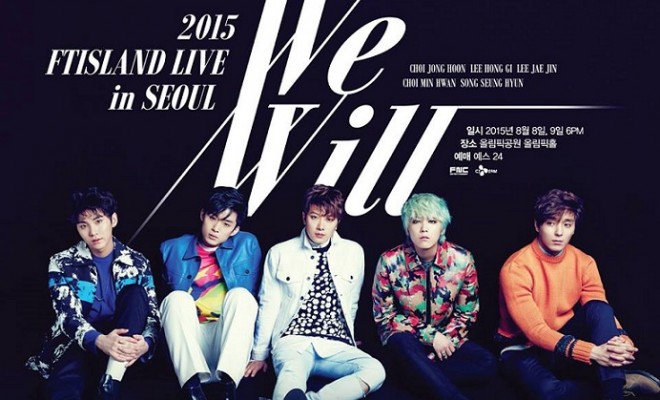 FTISLAND Gets Ready To Rock With A Concert In Seoul

Primadonnas, been missing the energetic and passionate performances of FTISLAND on the live stage? Miss no more as the talented group will be kicking off a domestic concert this August!

On June 17, FNC Entertainment released the exciting news on FTISLAND’s official Facebook page. Accordingly, the quintet will have a two-day concert, titled 2015 FTISLAND LIVE [We Will] in Seoul, at the Seoul Olympic Park’s Olympic Hall on August 8 and 9, after a 2-year hiatus since their last Seoul concert in September 2013.

The agency also uploaded a preview video for the coming concert onto the group’s official YouTube channel on the same day. In the 30-second video, the five members are seen putting their utmost efforts into bringing fierce and powerful stages, raising much anticipation from fans of what the boys will be showing in this long-awaited concert.

Moreover, in celebration of FTISLAND’s 8th debut anniversary since June 2007, the special concert will be organized with diverse events and performances where the boys can spend meaningful time with their fans.

Tickets for the official fan club members will go on sale from June 29 at 8 p.m, while general tickets will be available for sale from July 2 at 8 p.m through Yes 24.

Watch the preview video for FTISLAND’s coming concert below:

FacebookTwitter
SubscribeGoogleWhatsappPinterestDiggRedditStumbleuponVkWeiboPocketTumblrMailMeneameOdnoklassniki
Related Items2015 FTISLAND LIVE [We Will] in Seoulconcertdebut anniversaryFacebookFNC EntertainmentFTISLANDOlympic HallOlympic ParkSeoulticketsYes 24Youtube
← Previous Story BTS Goes Top Of Oricon Chart “For You”
Next Story → Get Ready To Have ‘Heart Attack’ From AOA In China, Japan and Korea!