G-Dragon is “falling in love” with Anne Hathaway? 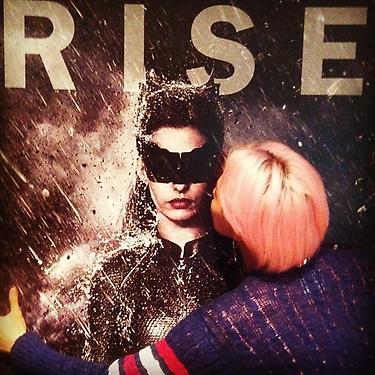 On July 20, G-Dragon posted the above picture on his Twitter along with the comment, “I’m falling in love with her. Dark Knight was awesome”. In the picture, G-Dragon is seen with his arms across the poster of American actress Anne Hathaway as Catwoman, and is about to give her a kiss.

G-Dragon, who has repeatedly changed his hairstyle, has also opted for daring pink hair this time, attracting much attention.

Followers of G-Dragon on Twitter posted varying comments to his post, saying, “I’m curious to know if he enjoyed Dark Knight”, “His hair colour is pretty” and “He seems to have fallen for Anne Hathaway completely”.

G-Dragon first created his Twitter account on the July 16 and to date, already has more than 290,000 followers, depicting his massive popularity.