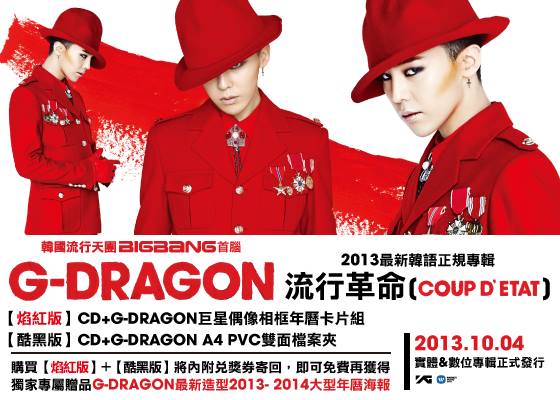 After topping the charts in South Korea, the hit album is set to make waves in Taiwan on October 4 and Hong Kong on October 8 as he will release a Taiwan edition in these countries. Two versions will be made available, which includes freebies like double-sided PVC file folder for the black version and calendar photos x 6 + one photo frame for the red version.

Hellokpop, as an independent Korean entertainment news website (without influence from any agency or corporation), we need your support! If you have enjoyed our work, consider to support us with a one-time or recurring donation from as low as US$5 to keep our site going! Donate securely below via Stripe, Paypal, Apple Pay or Google Wallet.
FacebookTwitter
SubscribeGoogleWhatsappPinterestDiggRedditStumbleuponVkWeiboPocketTumblrMailMeneameOdnoklassniki
Related ItemsCoup D'EtatG-dragonHong kongTaiwanYG Entertainment
← Previous Story Jay Park releases ‘Respect 16’ & MV
Next Story → Block B releases MV for ‘Very Good’