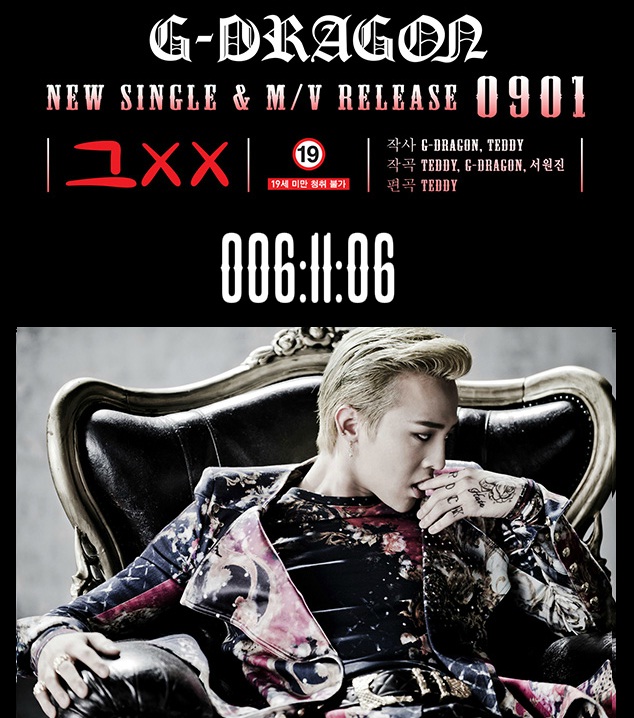 G-Dragon‘s follow-up track after One Of A Kind, That XX, will be released on September 1.

Previously, YG Entertainment has voluntarily put a R rating on the song which means that it is not suited and will not be available on music sites for those under 19 years old. That XX, composed by G-Dragon, will still be released as the company wants its message to be imparted in the same way it was written. However, the provocative lyrics of the song will be deleted in its music video in order for more people to watch it.

Hellokpop, as an independent Korean entertainment news website (without influence from any agency or corporation), we need your support! If you have enjoyed our work, consider to support us with a one-time or recurring donation from as low as US$5 to keep our site going! Donate securely below via Stripe, Paypal, Apple Pay or Google Wallet.
FacebookTwitter
SubscribeGoogleWhatsappPinterestDiggRedditStumbleuponVkWeiboPocketTumblrMailMeneameOdnoklassniki
Related ItemsBigbangG-dragonThat XXYG Entertainment
← Previous Story T-ara releases ‘Sexy Love’ teaser
Next Story → Super Junior’s Choi Siwon works with Karl Lagerfeld for ‘VMAN’ photoshoot