Gate Flowers: We want to be known as a Rock Band

By Marty M | May 1, 2013
FacebookTwitter
SubscribeGoogleWhatsappPinterestDiggRedditStumbleuponVkWeiboPocketTumblrMailMeneameOdnoklassniki

We want to be known as a band from Korea, but before all, as a rock band.

It is 6pm in Tunbridge Wells and here I am sitting down with the four members of Gate Flowers in the backyard area of the Forum – last year NME’s best little venue of the UK. Galaxy Express is currently doing an enticing sound check and we have to occasionally lean close across the table to hear each other. Gate Flowers’ Seung Shik is seated right in front of me and I quickly find out that he is the English spokesperson of the group with his English proficiency as fluent as mine. On his right is Jae In (Bass), Jong Eun (Drums), and Keun Hong (Vocals) on the side. Not knowing what to expect, I browse through my list of questions jolted down the day before after much thoughts and fire off this interview with some easy pedestrian questions:

How was your flight?

Is it your first time in the UK?

Seung Shik: No, our drummer and I came before for a trip, but it’s our first time playing here.

What does this tour represent for you?

Seung Shik: Well it’s our very first time playing in the UK and also our very first international tour. We had opportunities before but we were just too busy with things happening in our own country, so we’re very excited.

You have a couple of English songs but overall you use very little English into your songs. Could you describe your lyrical themes to our readers?

Seung Shik: Our singer writes all the lyrics. He writes about himself, his personal views, ideas, his feelings, everything that is related to him: the society, the world, politics, relationships.

[blockquote] When  someone listens to our music, he can hear all different parts doing their own thing, but after all they all come together.

Encouraged by the group’s kindness and attention, I thus ventured to take this interview out of its comfort zone to dig a bit deeper.

And how do the other members relate to it?

Seung Shik: We think the music is as important as the lyrics. He can write a poem but the music is our rhythm. We have a very strong rhythm section. Our drummer is excellent and so is our bassist. He’s very versatile; he can do rock, he can do folk; he can play any kind of stuff. He has his own style and me too. We don’t like anything that’s average, just normal. We want to come up with our own stuff.

How much control do you want to have over your sound? Do you spend a lot of time rehearsing and recording to get it right or do you just go with the flow and let your instincts speak?

Seung Shik: We want every member to have his own part. Sometimes we fight, within our song, musically and sometimes verbally. But after all, what we want to do is not to show what we have individually but what we have as a band. So, control? We fight until all our sounds mingle together. There is an unspoken rule of control. We never talk about it. When someone has a sound that we like, we just go with it and let the drums, the bass and the guitar mingle with it on their own time with their own sound.

By listening to your last album ‘Times’, it seems there is a lot of Mark Knopfler or even B.B. King in the way the guitar interacts with the other element of the songs. Are those guitarists personal inspirations for Seung Shik?

Seung Shik: Of course I love Mark Knopfler and it’s interesting that you mention it. Our EP, the one before Times, has more guitar presence within the music because, during that time, for our EP, most of the songs started from the guitar riff. But our Times album is well balanced, meaning the guitar took less control over the music.

But do you consciously try to give a distinct sound to the guitar as in there seems to be a dialogue between the guitar and the other instruments underneath the vocals?

Seung Shik: We try to have a distinct sound for each instrument, but also to find the right balance as a group. So for Times, I tried to balance the guitar more evenly with the other members. You should listen to the bass, and the drums, they’re really nice (laughs).

Keun Hong: When someone listens to our music he can hear all different parts doing their own thing, but after all they all come together. 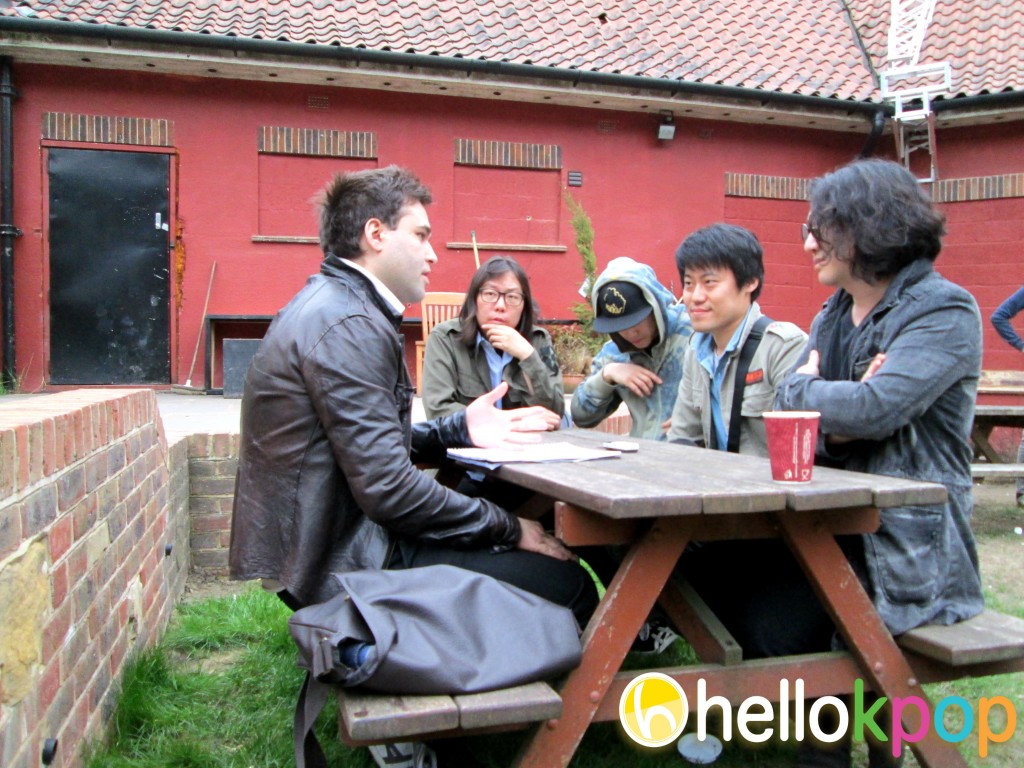 After Top Band,  the venues were packed (…) We were upset because we were always there.

I couldn’t be more pleased with the response from Gate Flowers. As we exchange conversation, I can feel the group’s eagerness, expectations and ambitions; as well as their passion, admiration of one another’s talent and the growing enjoyment of this unconventional interview. At this point, there was one question burning my lips that fuelled some warm discussions among the groups.

In coming to this UK tour do you feel like an ambassador for the Korean indie rock scene or are you just representing Gate Flowers?

Do you feel you have a mission to make the Korean rock scene more well-known?

Jong Eun: We feel the responsibility.

Jong Eun: Our music is part of a very popular genre in the Western parts of the world, especially in the UK and in America. We want to be known as a band from Korea, but before all, as a rock band.

Seung Shik: Of course we feel the responsibility, we are very responsible because we are from Korea and there is great rock music in Korea so if they can have some kind of attention, I mean have a blow, it’s great, but first and most of all we want to be known as a rock band.

Keun Hong: Even our music isn’t mainstream rock from Korea. Our style is definitely different from Korean rock music; we think we’re different from Apollo 18, Galaxy Express or Goonam which are the other bands on the tour,

Jae In: Or even Guckkasten.

Keun Hong: We think we are mainstream; that we became mainstream because of the TV show ‘Top Band’. And before that we didn’t get much attention, even in the Korean rock scene.

Seung Shik: I’d just like to add that TV show is really important for us. We cannot deny it; because we were in the Korean rock scene before Top Band and we sold about 200 copies of our albums. Even after the KMA (Korean Music Awards where Gate Flowers won Best Rookie and Best Rock Song for Reserve Army in 2011) we sold about 50 more; so altogether about 250, maybe 300. I know it’s pretty embarrassing but we weren’t embarrassed because it’s the listeners; they didn’t know about us but we were always there. And now they treat us like idol groups. I mean after Top Band, the venues were packed. Without any promotion we would fill 100 or 200 people capacity venues easily; and we almost sold out about a thousand shows after that, all of them in just day or not even. And we were upset, because we were always there. In Korean rock, we were minors.

And now you are big?

Seung Shik: We got bigger; but we still want to get bigger, meaning we want to promote our music to more people who might like our stuff. 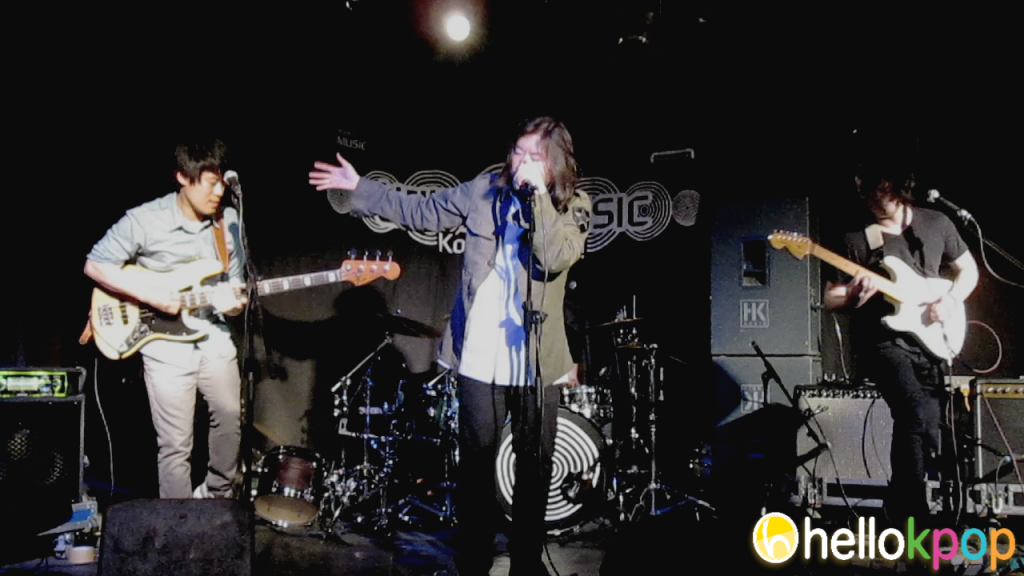 Our international audience is really important to us.

So you are not restricted to Korea?

Seung Shik: No, and that’s really important. Our international audience is really important to us. Very very important, that’s what we try to work on. This is our very first night in the UK and we are opening the show. It’s very important; I hope this is going to be the beginning of all. But we’re not on a mission as the very first Korean rock band or representing Korea. We have the responsibility because we are from Korea and there are other great musicians in our country and of course we want them to have this kind of chance.

Do you have any plan to conquer bigger audiences inside and outside Korea?

Seung Shik: We are working on it. But nothing is really sure yet, and you know, gigs like this are important, and maybe next year we’ll do ‘South By Southwest (SXSW)’. We try to do international festivals.

Keun Hong: Also we are going to write in English.

What makes you different as a group? What is your asset?

Jae In: We are spontaneous and dynamic; there is this “spur of the moment” thing within our sound.

So do you rely on your live shows a lot?

Seung Shik: Live shows are very important. We jam. There is this moment, this very particular moment that everybody likes, and we want to capture that moment into recording, and into live as well. We are very flexible, it’s not like we are only equipped into doing one thing with the only aim of conquering the stage; we’re not doing this. We want to enjoy the moment, the four of us, as a group. 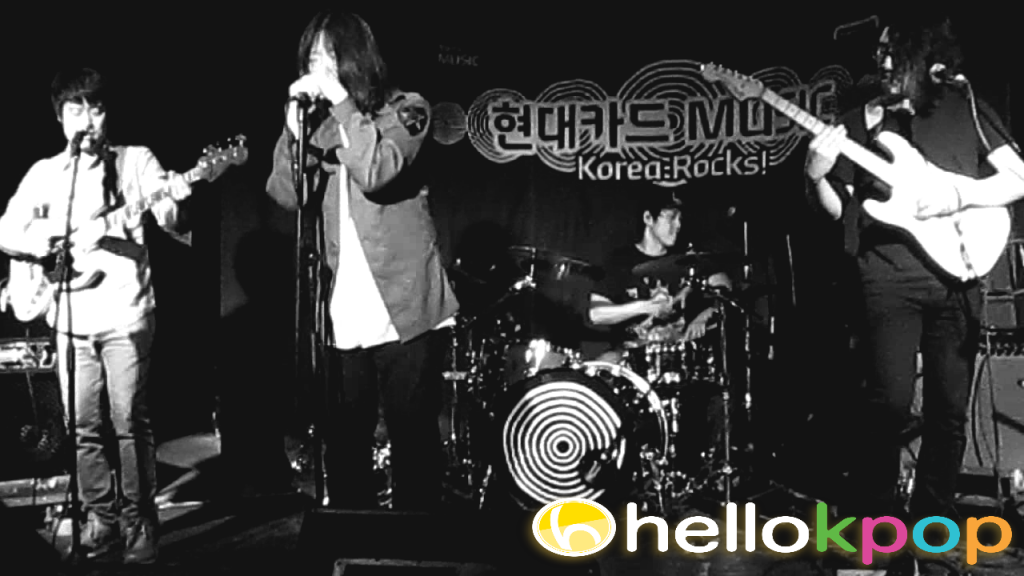 Unwillingly, we have to put an end to our interview as we exceed the allowed time of no more than 12 minutes. I am seduced by each member’s quality on the recordings; this interview makes me discover four passionate and affable artists. They will open the show tonight, the very first of this Korea Rocks Tour, and though I find it rather too short, I am totally blown away by their live abilities.

This is not any typical interview and encounter with a Korean artist with restrictions but I am granted full freedom of my questions which I take advantage of to reveal more about the band to all our readers. I would like to sincerely thank Gate Flowers for their honest and precious answers.

I say, what can we learn from this interview? Not only Gate Flowers is driven by passion, but they are taking their nascent international fan base with the utmost concern. They have made the efforts to come half way across the world to join this tour and appear adamant to create international connections with fans and press alike. Having such a proficient English spokesperson such as Seung Shik is an asset for their international expansion; but it would be nothing without their undeniable talent as group. As he himself said, “I hope this [tour] is going to be the beginning of all”, and it could very well be!

On behalf of hellokpop, I would like to wish them the greatest of success outside their frontiers as a rock group. They have now opened up to the world; I hope it will not take as much as an international TV show to bring them the attention they truly deserve.