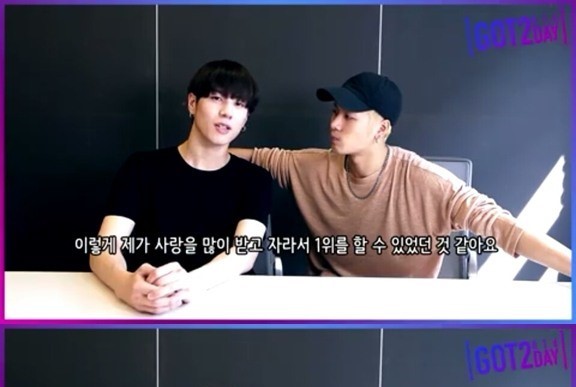 GOT7: Jackson Gives Compliments To Yugyeom Through ‘GOT2Day 2016’

Can you guess what they talked about?

GOT7‘s Jackson and Yugyeom have just appeared on September 30 episode of GOT2Day 2016. The video featured an intimate conversation between the two GOT7 members.

During the clip, Jackson continuously gave compliments to Yugyeom for his dancing skills, which made him become the winner on the latest episode of dancing competition program Hit the Stage.

Jackson expressed admiration to his groupmate, by saying: “I see that all seven members of GOT7 are adept at dancing. The thing is, the body condition of the rest of us six members affects our performance, while Yougyeom makes stable and decent performances no matter whether he is at his best or worst condition.”

He added: “When Yugyeom dances, it does not seem like Yugyeom dances along to the beat. Instead, the beat keeps along with Yugyeom’s choreography.”

Replying to Jackson’s compliments, Yugyeom showed his modesty by revealing that the key factor, which helped him won the first place on Hit the Stage, is “affection from a bandmate”.

Meanwhile, GOT7 recently released its new album titled Flight Log: Turbulence on September 27. The album’s lead track dubbed Hard Carry swept music charts in many countries all over the world as soon as it was released.