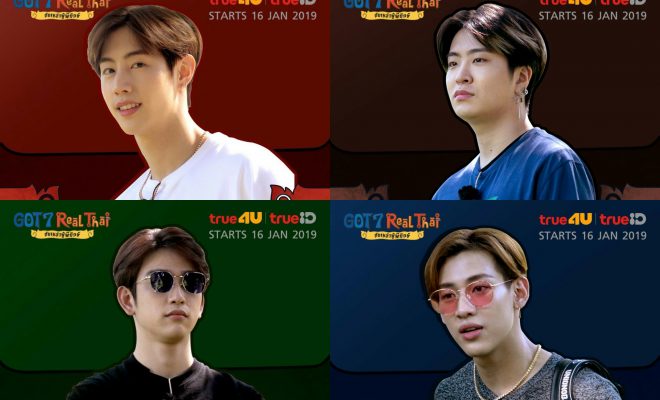 GOT7 To Complete Missions In Thailand For New Reality Show

GOT7 says “bring it on!” to an adventure in Thailand for their new reality show!

GOT7 members are off to wander around Thailand (with a purpose!) in their new reality show titled GOT7’s Real Thai!

Members Mark, Jinyoung, Youngjae, and BamBam are set to (hard) carry on tasks and challenges while exploring the Land of Smiles in the upcoming reality show.

READ: GOT7 To Celebrate Its Fifth Anniversary With IGOT7s Through A Fan Meeting

The show will bring the four to the beautiful land of Thailand in order to complete seven missions. These missions entail finding the seven traditional Thai deities which each represent health, fame, happiness, and more.

“Dreaming of a 2019 that explodes in good luck, GOT7 leaves to search for Thailand’s seven lucky gods,” MBN wrote to describe the show.

Despite only having four members out of seven, the group promises to give everyone a fun and entertaining time watching their journey. In the teaser video released on December 14, the four members are seen convening in a meeting before leaving for Thailand – with BamBam already giving Ahgases something to laugh about.

GOT7’s Real Thai will air on XtvN on January 16 at 8 PM KST. It will also be broadcasted on the Thai channel True4U.

Are you looking forward to GOT7’s new reality show? Let us know by leaving a comment below, giving us a holler on Facebook, or tweeting us at @hellokpop!