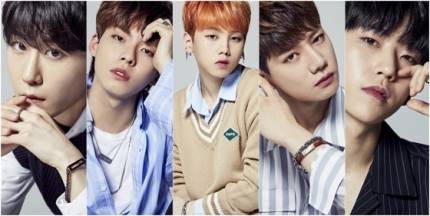 Selected boys from HNB are Happy Face Entertainment’s newest artists. The agency is the home of Dreamcatcher. It also housed Dal Shabet since 2011. The new group is now completed and will debut this year.

Woo Jinyoung, Kim Hyunsoo, Park Woodam, Jung Yoojoon and Jo Yonggeun make up the members of HNB. These five were selected to be part of the agency’s upcoming boy group. Previously, they were part of Happy Face Entertainment’s trainees.

The boys already started their preparations during the first half of the year for their debut. According to the agency, they are still planning for the group name.

In addition, the agency decided to have a new name along with the new group. It plans to reflect the opinion of the fans through continuous meeting of the members and staff regarding group name suggestions through voting.

HNB or Happy Face Next Boys had went through rigorous training and experiences to finally get their dream debut. Some members appeared on Mnet’s Produce 101 Season 2 and JTBC’s Mix Nine. In addition, they established a solid fanbase through fan meetings as HNB.

Check out some videos of the boys below.

Groove to the collaboration of Woo Jinyoung, Park Woodam and Jung Yoojoon:

See how charming Woo Jinyoung and Kim Hyunsoo are with “Falling In Love”:

Read Also: Everything We Have Learned About TXT Members Through “Talk X Today”