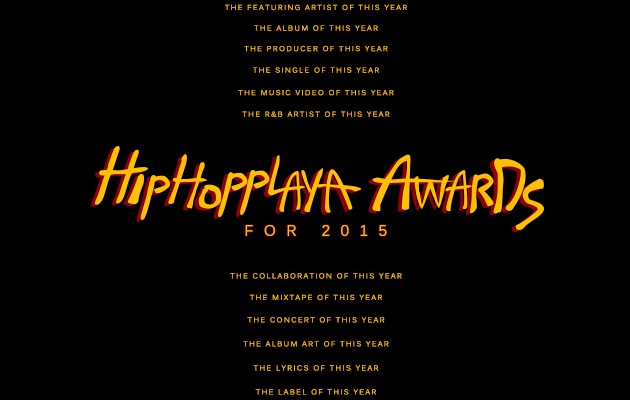 E-Magazine website HipHopPlaya has unveiled the results for its ‘HipHopPlaya Awards for 2015‘!

The awards features seventeen categories in which members of the community were able to nominate, select, and vote for artist(s) that seemed most deserving. Nominations were submitted from January 12-25 and candidates were selected from January 26-31. The voting period went live from February 1-22.

The recipients for the HipHopPlaya Awards are listed below:

Artist of the Year: E Sens

Rookie of the Year: Bewhy

Featuring Artist of the Year: Babylon

Album of the Year: The Anecdote

Producer of the Year: Codekunst

Song of the Year: It G Ma by Keith Ape

Music Video of the Year: It G Ma by Keith Ape

R&B Artist of the Year: Dean

Mixtape of the Year: Levitate by Swings

Concert of the Year: Alter Ego 5

Lyric of the Year: CJAMM ‘rather than rap skill what you should practice more is street fight‘

Label of the Year: AOMG

Fashion Icon of the Year: Zico

Issue of the the Year: The Anecdote

Rising Star of the Year: Nafla

Hellokpop, as an independent Korean entertainment news website (without influence from any agency or corporation), we need your support! If you have enjoyed our work, consider to support us with a one-time or recurring donation from as low as US$5 to keep our site going! Donate securely below via Stripe, Paypal, Apple Pay or Google Wallet.
FacebookTwitter
SubscribeGoogleWhatsappPinterestDiggRedditStumbleuponVkWeiboPocketTumblrMailMeneameOdnoklassniki
Related Items2015Alter Ego 5aomgBabylonBewhYCjammCodekunstdeanDeepflowE-SensfashionhiphopHiphopplayaHiphopplaya AwardsHuckleberry PIt G MaJakduKeith ApeLevitateNaflaNucksalr&bSwingsThe AnecdoteYanghwaZico
← Previous Story Lee Hi Teases ‘Seoulite’ Return
Next Story → AOA’s Jimin And EXO’s Xiumin Reveal Their Cute MV Teaser