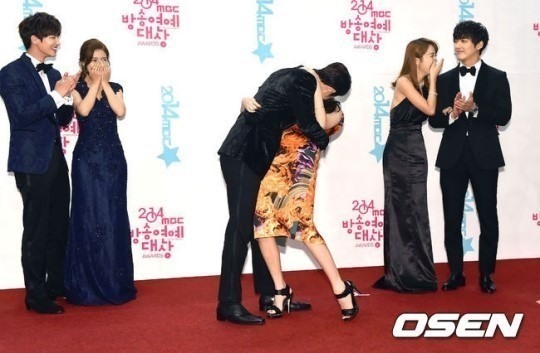 On the red carpet, while two couples, Kim So Eun, Song Jae Rim and Nam Goong Min, Hong Jin Young, from We Got Married were posing for the camera, Hong Jong Hyun and Yura surprised everyone by acting out a kiss performance. This sudden move not only shocked the two couples but also the audience attending the event.

The Jjonga (Jong Hyun and Yura) couple have received much love from fans through the MBC’s virtual marriage reality show We Got Married. They made their fans’ hearts flutter each time they had a ‘skinship’ moment on the program.

Meanwhile, Yura and Hong Jong Hyun received the Female Newcomer Award and New Star Award, respectively, at the 2014 MBC Entertainment Awards. Yura said: “I was not expecting this. I am truly thankful for the award. It means a lot to me. And thank you for your support for the Jjonga couple.”