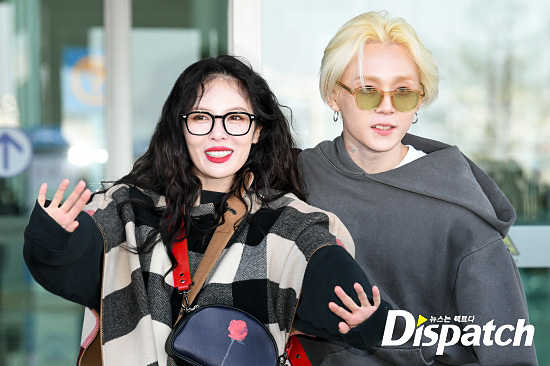 Hyuna and Hyojong may be gearing up for a comeback in 2019!

On December 18, Hyuna went on her Instagram live to talk to her fans about her plans in the future. During her live, she was with Hyojong (E’Dawn) and his friends waiting for their food at a restaurant in Seoul.

While answering questions from her Instagram comments, Hyuna mentions that she was working on plans to meet her fans. “You know that I love performing the most,” she notes.

Aside from a live performance, Hyuna also mentions that she’d like to start recording for a new album, and hopes to star in a reality show next year.

Hyojong has also been thinking about meeting his fans! When asked by Hyuna if he’d like to help out with her album, he replied with “I have to meet my own fans.” While he doesn’t give a specific timeframe, Hyojong says that he misses interacting with his fans and hopes to get the chance to interact with them soon.

On the topic of interacting with fans, Hyuna shares that she and Hyojong keep the letters they receive from their fans. She notes that she genuinely loves getting to interact with her fans. She enjoyed meeting and talking to her fans at the airport in Paris.

Hyuna and Hyojong are currently not backed by any entertainment agency, after Cube Entertainment terminated their contracts after they confirmed their relationship earlier this year. They have been updating their fans through Instagram, posting updates on new music and photos from pictorials.

Hellokpop, as an independent Korean entertainment news website (without influence from any agency or corporation), we need your support! If you have enjoyed our work, consider to support us with a one-time or recurring donation from as low as US$5 to keep our site going! Donate securely below via Stripe, Paypal, Apple Pay or Google Wallet.
FacebookTwitter
SubscribeGoogleWhatsappPinterestDiggRedditStumbleuponVkWeiboPocketTumblrMailMeneameOdnoklassniki
Related ItemsE’DawnHyuna
← Previous Story GFRIEND To Greet 2019 With A New Album
Next Story → WINNER Achieves All-Kill Status, Tops iTunes Charts With “Millions”