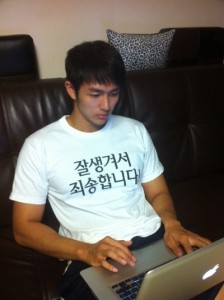 On the afternoon of 18th of July, Jung Jin Woon posted the above picture on Twitter, along with the comment “Hehehe”. Im Seulong was seen reclining on the sofa with a notebook on his lap, his eyes fixed on the screen before him. What caught everyone’s attention was the phrase “I’m sorry for being handsome” printed on his short-sleeved white shirt.

Im Seulong posted “What have you done again” in reply to the post, drawing smiles as the hilarious exchange continued. 2PM’s Hwang Chan Sung also commented on the post with a witty statement, saying “Hyung, if you are really sorry, you need to make a public apology to Won Bin and Jang Dong Gun”.

“Jung Jin Woon who took this picture, and Im Seulong who wore a shirt like this, both are cute”.

“Is this shirt a present for fans? Their sense of humour is awesome”.

Hellokpop, as an independent Korean entertainment news website (without influence from any agency or corporation), we need your support! If you have enjoyed our work, consider to support us with a one-time or recurring donation from as low as US$5 to keep our site going! Donate securely below via Stripe, Paypal, Apple Pay or Google Wallet.
FacebookTwitter
SubscribeGoogleWhatsappPinterestDiggRedditStumbleuponVkWeiboPocketTumblrMailMeneameOdnoklassniki
Related Items2AM2pmHwang Chan SungIm SeulongJang Dong GunJung Jin WoonWon Bin
← Previous Story Official AOA teaser site releases teaser image of Chanmi T.T
Next Story → MYNAME members are fine after car accident