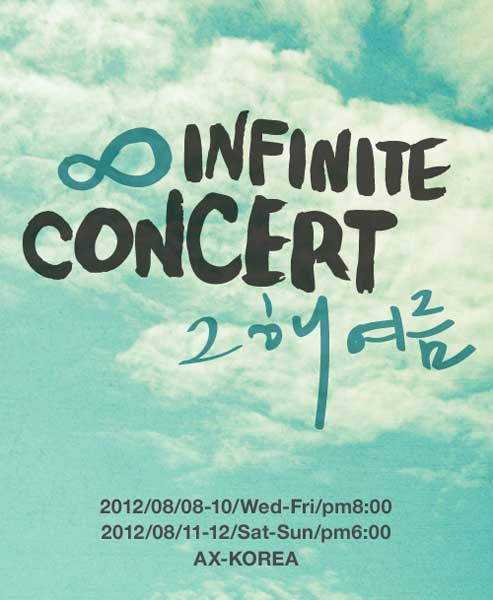 Shortly after wrapping up their promotions with their third mini-album INFINITIZE, the members of synchronized idol group INFINITE have now announced that they will be holding their third concert in August titled That Year’s Summer.

That Year’s Summer will be held over five days, from the 8th to the 12th of August.  The concert will be held at AX-KOREA, which will accommodate 2000 attendees, and during those five days INFINITE will be able to meet up to 10 000 fans! It is reported that the boys have chosen a smaller venue in order to bring themselves closer to their fans.

The concert will have a unique style, as INFINITE will be performing special unplugged versions and covers of their own songs and dance tracks, giving each track the special feeling of summer. Tickets for That Year’s Summer will be available via Interpark starting from the 12th of July. Back in February, INFINITE held their first solo concert Second Invasion, following with their encore concert Second Invasion Evolution in April, which both sold out within a very short period of time.

Do you think this concert will do just as well?

Hellokpop, as an independent Korean entertainment news website (without influence from any agency or corporation), we need your support! If you have enjoyed our work, consider to support us with a one-time or recurring donation from as low as US$5 to keep our site going! Donate securely below via Stripe, Paypal, Apple Pay or Google Wallet.
FacebookTwitter
SubscribeGoogleWhatsappPinterestDiggRedditStumbleuponVkWeiboPocketTumblrMailMeneameOdnoklassniki
Related ItemsAX-KOREAconcertINFINITEInterparkSecond InvasionSecond Invasion EvolutionThat Year's Summer
← Previous Story Big Star release concept photo for ‘Big Start’
Next Story → MTV Asia to air ‘Ta-Dah! It’s B.A.P’ reality series