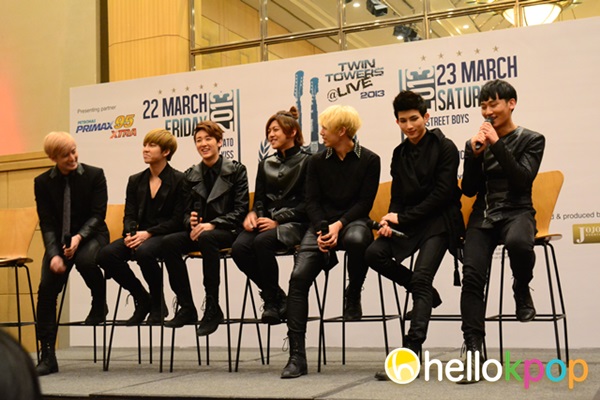 After the press conference for Twin Towers @Live 2013,  the members of U-KISS were still pumped up with volumes of energy to go through many continuous interviews that would be- and were- taxing. They greeted each media representative with warm smiles and bows, shaking off the butterflies that one would most likely have a serious case of, especially when you’re going to meet and be in a room with seven handsome yet talented performers! The boys were relaxed yet energetic, making the interview, even though short, a fun and memorable one.

hellokpop was fortunate to have this quick interview with U-KISS, with special thanks to JoJo Events and Wayne Phoo from Malaysian radio station, MyFM.

What were the boys’ thoughts about Malaysia, their newest album and potential side-projects? Read on to find out!

hellokpop: Hello U-KISS, welcome back to Malaysia! How do you find Malaysia and Malaysian KISSMes in general?

Kevin: We’re really glad that we are back in Malaysia because we really missed our fans, and it’s been a few months since we have been here. I’ve heard that they (KISSMEs) are waiting for us and that they really wanted to meet us, so this time we’re here to perform, along with a lot of other artists. We’ll be performing our new song, ‘Standing Still’, as we just released our third full-length album in Korea, and we’re ready to put on a big show (for [email protected])!

hellokpop: Your latest album Collage has a very interesting mix of musical styles. Can you give an introduction of what the album is about?

hellokpop: Which songs are your individual favorites?

Kiseop: More Painful than Pain! Soohyun’s voice in the song is very good, and it really brings the song up to another level. He is also able to properly evoke emotions through it.

Hoon: I like Standing Still! It took a lot of preparation for this song to become our title song, and we had really put a lot of thought into it. It was a hard decision for us to choose (the title track) as there were many different songs that we wanted to become title songs from the album. But this time we chose this song as it represented our more mature side.

Kevin: I like My Reason– it’s my solo song in this album! I like the lyrics and the whole vibe of the song because it’s really lovely, and it talks about my first love, and how I feel about that girl.

AJ: Personally, I prefer Party All The Time– and not because that I made the song! (laughs) But I actually like the song because it makes you excited- like when you’re depressed, when you hear this song, it makes you happy. It’s a song that everyone can enjoy.

Soohyun : I like Sweety Girl as a lot of Fans like the song, and it’s really upbeat and happy. I like the guitar riffs featured in it, as well as Kevin’s vocals in the song!

Dongho:  I like the track Because I Love you – it has a nice melody and it’s really easy to listen to. It’s light and relaxing.

Eli:  I also like Party All The Time. Like AJ said, when you listen to it, it gets you all excited. But for me, the track makes you feel good!

hellokpop: Does U-KISS have any other activities? With more singing idols joining the acting scene, do you have plans to act in dramas or movies any sooner?

Eli: For me, I was on a show that introduces Korean Pop fans to Korea with NS Yoonji. (The show was called K-POP Tasty Road and it gave a sense to K-pop fans about where their favorite celebrities hung out.) It was a lot of fun so I hope in the future that I am able to do more MC work.

Dongho: I myself would like to try my hand at being a radio deejay!

AJ: I would like to try many new things, but I mostly want to try a duet, like a unit group among our members.

Kevin: I always wanted to try a musical, and this time around I got to participate in a musical with Soohyun, so I am really excited about that! Our musical is called ‘Summer Snow’ and we are going to be performing it in Japan.

Hoon: I hope to try acting in romantic and action movies! No horror movies! I want to save a pretty girl and be the main hero!

Hellokpop: U-KISS has been actively participating and appearing in a lot of variety shows from the very beginning, such as Dream Team. Do you have any future plans for such appearances?

After the interview, U-KISS sent their shout out to hellokpop readers and KISSMEs, and look forward to everyone’s support for their third full-length album, ‘Collage’!

We hope to see U-KISS back in Malaysia again very soon!