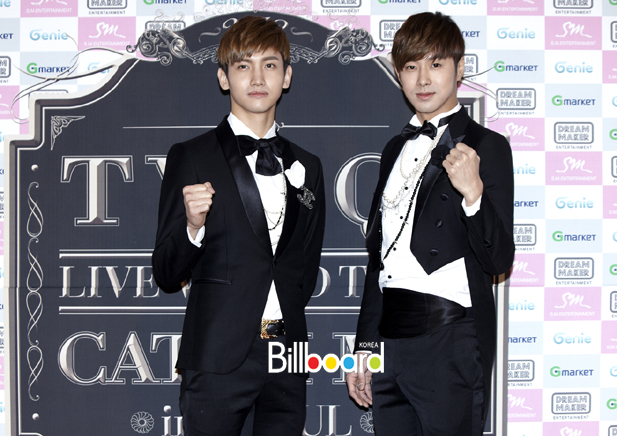 Is TVXQ coming to your city? More locations announced for “TVXQ! LIVE WORLD TOUR ‘Catch Me'”

More countries have been added to TVXQ’s world tour schedule after Billboard Korea revealed that the United States, England, France, Australia, Russia, China and Japan are among the many countries that the duo will be heading to next.

International fans of TVXQ can now rejoice after Billboard Korea reported that TVXQ will head to the United States, England, France, Australia, Russia, China, Japan and “many other cities” after successfully wrapping up the Korean leg of the tour on November 17 and 18.

Countries that were originally confirmed for the “world tour” were South Korea, Hong Kong, China, Thailand and now several other countries have now been added to the tour schedule. However, no further details such as dates and cities were announced.

TVXQ spoke to Billboard Korea about the Korean leg of the TVXQ! LIVE WORLD TOUR ‘Catch Me’ tour. “It’s our first performance in Korea in four years and we’ve been thinking, ‘have they have been waiting?’ or ‘would I buy these tickets if I were in their positions?’ and worried a lot.” The duo also added that they were “surprised” that all 25,000 tickets were sold out within three minutes in Korea.

One half of TVXQ, Max Changmin thanked fans for waiting and added, “Due to the fans who have waited for such a long time, we are able to stand in this place now. Preparing albums and preparing for tours and performances isn’t as easy as talking about it.”

From January to April, TVXQ toured in 11 cities in Japan, performing over 26 stages. The duo promised with the new world tour that they will localise each performances, which will allow them to connect with their international fans.

U-Know Yunho added an example from their Japan tour, “For Japan’s Tokyo Dome’s performance, we are planning to show a 3D mapping technique with the songs Sky and Summer Dream. I think if you watch our stage, you will think ‘they prepared a lot’.”

For the world tour, they plan to visit new countries that they’ve never visited before. The pair apologised for not visiting countries such as the Philipipines but promised to stop by the Philippines this time.

U-Know Yunho said, “We’ve never been able to go to the Philippines yet but the fans continue to love us. We are very sorry that we’ve never visited them before. But through this opportunity we plan to go to countries we weren’t able to go to in South Asia, Europe and many others. We want to perform in new continents as well.”

TVXQ  has just wrapped up their Korean leg of the tour and will soon head to the United States, England, France, Australia, Russia, China, Japan and many other cities. Songs included on the tour are Humanoids, Here I Stand, Why, Mirotic with their Japanese hit singles being added. A total of 27 songs will be performed.

TVXQ, who has been labelled frequently as the leaders of the Hallyu Wave talked about the growth of K-Pop. “K-pop is able to shine at this moment. We think a lot of people love K-pop right now. We hope that this love and support will live on and continue.” They said.

Label mates, Girls’ Generation was reported earlier today to be releasing a debut English album next year after the world-wide success of PSY’s Gangnam Style. Read more about it here.