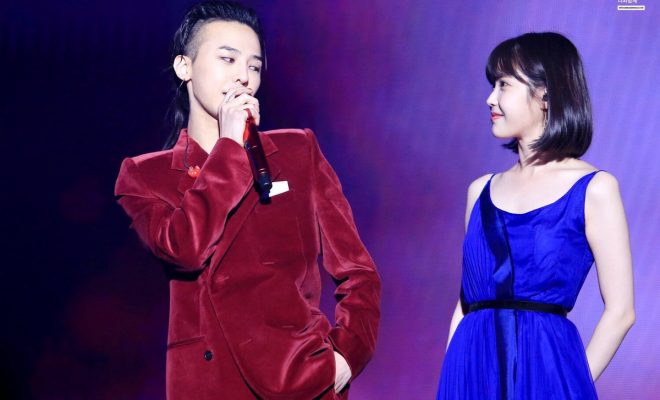 The present for G-Dragon must have a special meaning behind.

On June 10, G-Dragon held a concert in Seoul, South Korea. The event is a part of the idol’s world tour dubbed 2017 Concert: Act III, M.O.T.T.E. IU, who recently collaborated with G-Dragon for her track dubbed “Palette”, make a special appearance at the rapper’s concert. The two brought fans the live performance of their collaborative track for the first time.

Read more: G-Dragon Sneaks Up On A Startled IU; Perform “Palette” Together

They also performed another sweet song named “Missing You” together.

After the renditions, G-Dragon shared about the special present that he was gifted by IU recently, saying: “IU sent me a refrigerator. I was wondering why a refrigerator, then realized, there were bottles of soju filled in (it).”

The BIGBANG member explained the meaning of the gift: “She gave it to me so that I can drink it all up to ease my mind before my enlistment.”

Right after that, IU added: “I put stickers with his face on the bottles. You’d better drink hard to finish them all up.”