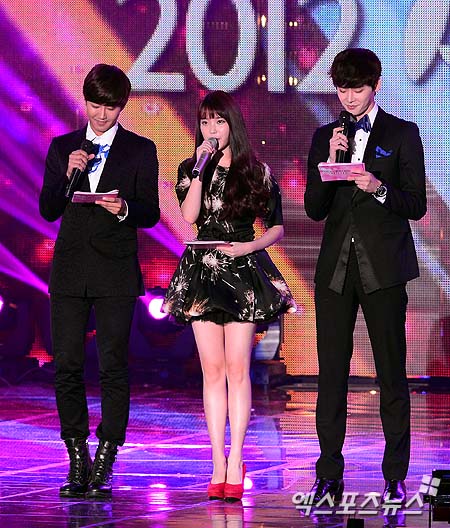 IU made her first public appearance today on the 2012 Love Sharing Concert, showing a confident composure emceeing amidst the photo controversy around her and Eunhyuk.

On November 11 IU shared the the emcee stage with Lee Jong Seok and Kwang Hee from ZE:A. IU, who has been receiving a lot of attention because of her photo with Super Junior member Eunhyuk, was noted to have her usual composure while emceeing.

The 20 year old singer did not make any mention about the controversial photos and aside from her workmanship, viewers also noticed how cute she was while hosting.

On November 10 IU’s label Loen Entertainment was quick to explain that the picture that IU accidentally tweeted was taken in summer while she was sick and Super Junior’s Eunhyuk came to visit.

“Eunhyuk visited her and they took the picture in question on a couch. Some people are still blowing it out of proportion but we would appreciate it if you listen to the official announcement.”

“Why do you think we said that the picture was not retouched nor hacked and IU posted it by herself? The announcement is true so please stop over interpreting IU and Eunhyuk. They are just close friends.” The spokesperson said.

IU’s label also said that the singer was apologetic towards Eunhyuk for the mistake. ““IU was tweeting early this morning and released the picture by mistake. IU feels very sorry about the confusion and apologizes to Eunhyuk for any trouble caused regarding the picture.”

The agency added, “IU and Eunhyuk have been close friends since her debut. Eunhyuk is so close to IU that he even spends time together with IU and her mother for the occasional meal.”