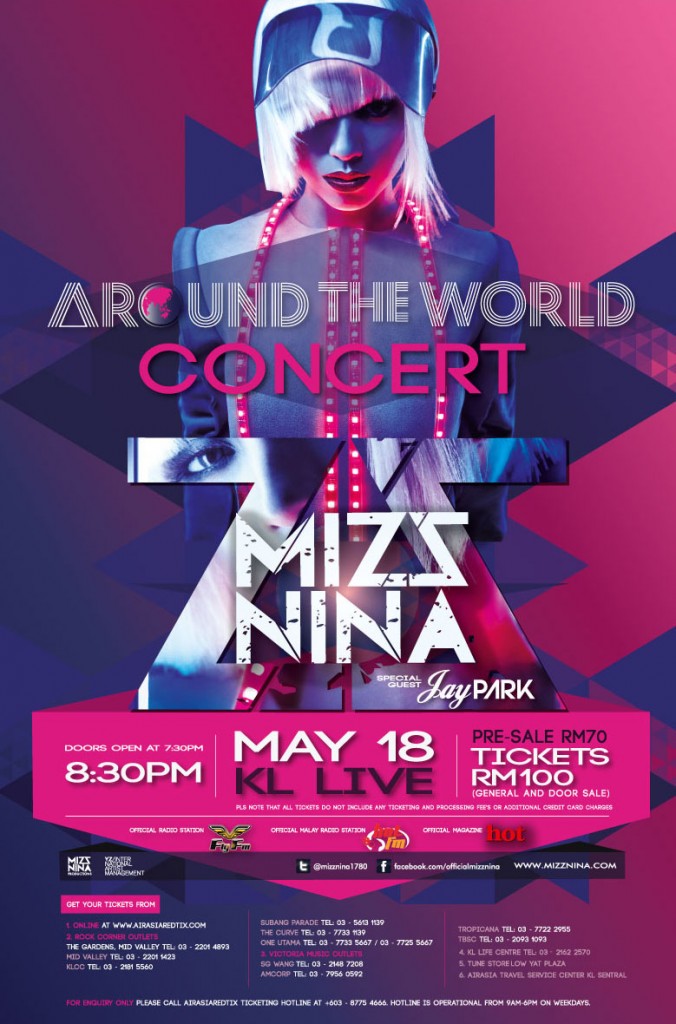 Malaysian artist Mizz Nina who has recently released her new single Around The World, an explosive collaboration with K-pop star Jay Park, has finally set the date for her first-ever major concert entitled, Around The World Concert. Held at KL Live in Malaysia on 18 May, the one-hour show promises to be a sensational affair for fans of pop, R&B, hip hop and dance music, complemented with a top-notch live band.

Mizz Nina once again reserves her rightful place in the lofty echelons of Malaysia’s pop music universe as she settles into a familiar role–one she loves doing and is exceptionally good at: performing onstage. After close to three years since her debut into mainstream pop in 2010, Mizz Nina is giving back to her fans and long-time supporters with a concert showcasing her past and present repertoire.

“I’m very excited about the team that I’m working with,” says Mizz Nina, who felt it was the right time to hold her own concert now that she had two albums’ worth of material. “They have all been chosen for their production and creative abilities, and I really can’t wait to see everything that we’ve been planning come to life.”

Besides appearances with special guests Jay Park and husband Noh Salleh (of indie band Hujan), Mizz Nina will be sharing the stage with the original members of Teh Tarik Crew, the group that saw her break into the Malaysian music scene in 1999 as a rapper. It’s a nostalgic return to form for Mizz Nina as well as members Altimet, Fiquetional and DJ Fuzz, who have come a long way since, and going by TTC’s comeback performance at the Raising The Bar Festival in January, it will be nothing short of evocative.

Contributing to the production of this live music spectacular is the concert’s creative director Raja Malek, music director Genervie Kam and head choreographer Marcus Tucker. Raja Malek has served as production designer for such musicals as Puteri Gunung Ledang and The Secret Life of Nora, and currently assumes the role of creative director for many of Sheila Majid’s projects.

Genervie Kam is a multi-award winner and one of KL’s most coveted music directors. She is also an internationally established violinist, pianist, arranger and composer, and has been involved in numerous projects that include the Anugerah Juara Lagu and working with artists like Faizal Tahir. New Jersey-born choreographer Marcus Tucker has been the man behind those slick dance moves performed by Mizz Nina and her Z Team. He was a member of the UK’s #1 b-boy and freestyle dance crew Funkstylerz UK and has worked with huge stars like Nas, Nick Cannon and Pixie Lott. He’s also delved into theatre as a director, choreographer and performer; and is often invited to judge dance competitions around the world, including Malaysia’s So You Think You Can Dance and Astro Battleground.

Details of Mizz Nina’s Around The World Concert

*Tickets can be purchased online at redtix.airasia.com/Events/mizznina/ and all Rock Corner and Victoria Music Outlets.

FacebookTwitter
SubscribeGoogleWhatsappPinterestDiggRedditStumbleuponVkWeiboPocketTumblrMailMeneameOdnoklassniki
Related ItemsAround The WorldhujanJay ParkMizz Ninanoh sallehteh tarik crew
← Previous Story PSY looking to hire a personal chef; are you the one he wants?
Next Story → M.I.B unveils the BTS making video of ‘Money In The Building’