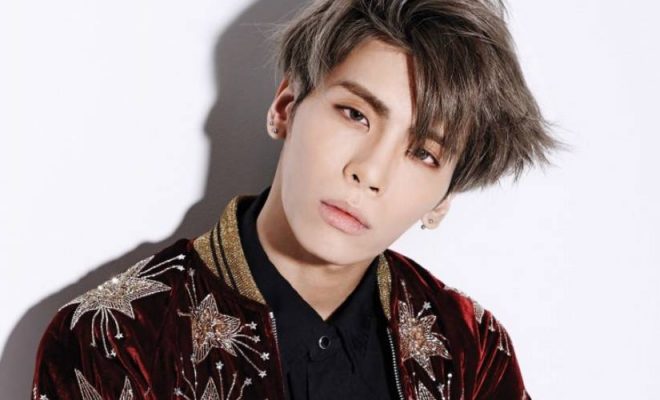 Jonghyun must have suffered from much depression before making his final choice.

On December 18, SHINee’s Jonghyun was found dead in his apartment in Cheongdam-dong, Seoul.

On the same day, SM Entertainment made an official statement to confirm that the singer took his own life at the age of 27.

Shortly after the passing of SHINee’s member, on December 19, Dear Cloud’s vocalist Nine 9, who is known as Jonghyun’s close friend, revealed his painful suicide note through her Instagram. 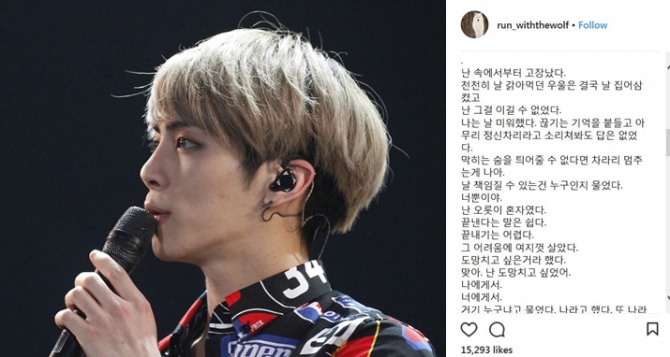 I was broken from the inside.

The depression slowly chipped me away, finally devouring me.

I could not beat the negativity.

I hated myself. Even though I tried so hard demanding my memories that kept getting cut off to ‘wake up,’ all I got
in return was silence.

I‘d rather stop if I cannot breathe.

I asked who could be responsible for me.

You’re the only one.

It is very difficult to actually go through with it.

I’ve been struggling through the difficulty.

I told myself that it‘s just me wanting to run away from everything.

It’s true. I really did want to run away.

I asked, “Why do I keep on losing my memory?” They said it‘s due to my personality. I see. It’s all my fault.

I wanted someone to notice (my suffering), but no one knew. Of course, they wouldn‘t. They never met me before.

I asked why people live. Just. Just. They live “just because.”

If I ask why people died, they would probably say they couldn’t bear it any longer.

Troubling thoughts flooded my head. I never got the chance to learn how to change dull pain into pure joy.

I kept reprimanding myself not to do so.

Why? Why can‘t I even end my life with my own will?

I tried figuring out the reasons for my pain and suffering.

I already had the answer. I was in pain because of me. It’s all my fault that I carry so many imperfections.

Teacher, is this what you wanted to hear?

No. I didn’t do anything wrong.

I used to think that it’s so easy for doctors to blame your personality for the suffering in their calm voice.

It surprises me how I am feeling this much pain. Those people, who have suffered worse than I, seem to go on living perfectly fine. Those weaker than I am live on as well. I guess not. Among the living, there is no one who is suffering worse and no one who is weaker.

The only answer I got back was “just live nevertheless.”

Asking the purpose of life more than one hundred times is not for me. It’s for you.

I wanted to do it for me.

How could you ask me to still look for reasons behind my pain? I told you multiple times why I‘m suffering. Do I need more reasons to be in pain? More dramatic details in my stories? More stories even?

I told you already. Were you absent-minded when I told you? Things you can bear and even come above do not leave scars.

It wasn’t my responsibility to go against the world.

It wasn‘t my path to become world-famous.

That’s why they say it‘s hard to go against the world and to become famous. Why did I choose this path? It’s quite funny now that I think about it.

It‘s a miracle that I endured through it all this time.

What more can I say. Just tell me “good job.”

You did great. Tell me I suffered enough.

Even though you can’t laugh right now, just don‘t send me off blaming me.

You suffered a great deal.

Meanwhile, Jonghyun’s funeral will be held privately in the morning of December 19 with the attendance of his family and SM Entertainment’s officials.