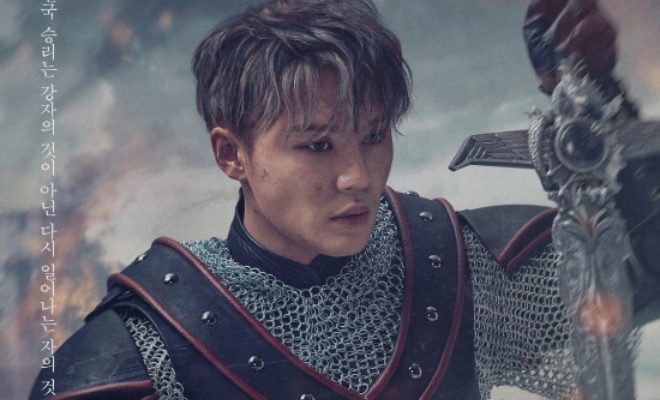 Kim Junsu preps for his new musical in new photos as Arthur!

JYJ’s Kim Junsu will breathe life to Arthur, the legendary British monarch, through Xcalibur, the South Korean presentation of the musical Artus-Excalibur.

In the new character poster unveiled on April 16, the singer emits an intense aura with his strong charisma and presence, fitting for the character’s destiny as king. Holding on to the Excalibur, he displays powerful yet distant emotions through his eyes amid the overwhelming background of a war-stricken field.

With the new photo, Kim Junsu builds up anticipation for his newest musical production which will open in June. 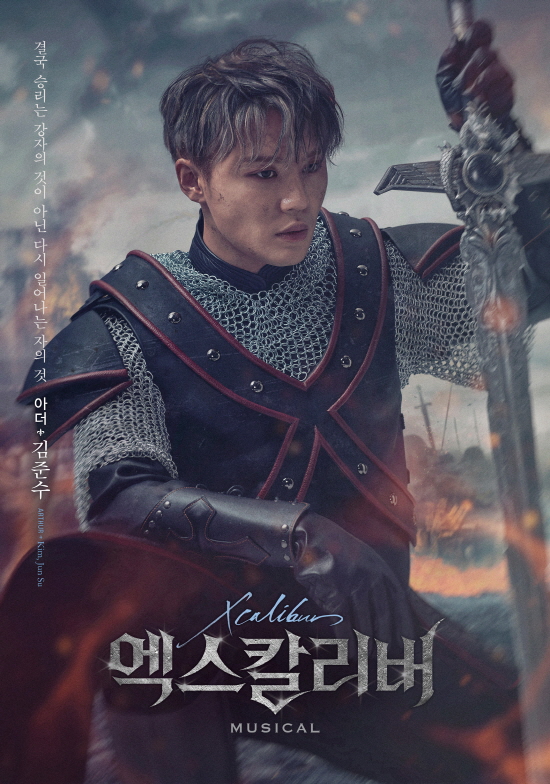 The JYJ member adds Xcalibur to his long-list of musical participations, starting with a role as Wolfgang Mozart in the 2010 musical Mozart!. He then reprised the role in 2011 — the year which saw him perform as Jun Hyung in the production Tears of Heaven.

He continued delivering outstanding performances as Tod in Elisabeth, Jiwook in December, Count Dracula in Dracula, L Lawliet in Death Note, and the titular character in Dorian Gray. The singer returned as L Lawliet on the musical stage in 2017 for his final performance before his military enlistment.

Following his discharge, Kim Junsu came back as Tod in Elisabeth. And this year, he joins SEVENTEEN’s DK and musical actor Kai in playing King Arthur in Xcalibur.

The upcoming musical sold out tickets during the first ticket opening. It is expected to receive a hot response once again when it holds its second ticket opening on April 16 at 8 p.m. through Melon Ticket, Sejong Culture Ticket, and Interpark Ticket.

Xcalibur will begin on June 15 at the Sejong Center for the Performing Arts.

Hellokpop, as an independent Korean entertainment news website (without influence from any agency or corporation), we need your support! If you have enjoyed our work, consider to support us with a one-time or recurring donation from as low as US$5 to keep our site going! Donate securely below via Stripe, Paypal, Apple Pay or Google Wallet.
35
SHARES
FacebookTwitter
SubscribeGoogleWhatsappPinterestDiggRedditStumbleuponVkWeiboPocketTumblrMailMeneameOdnoklassniki
Related ItemsJYJKim JunsuXcalibur
← Previous Story MONSTA X I.M Raises Expectations With Most Awaited Upcoming Mixtape
Next Story → Musical “Mefisto” To Star INFINITE’s Nam Woo Hyun, VIXX’s Ken, HOTSHOT’s Noh Tae Hyun & More