JYJ’s Jaejoong Had A Great Time With 2,000 Japanese Fans Before His Military Enlistment

Kim Jaejoong has successfully wrapped up his 2015 All of Jaejoong fan meeting with about 2,000 Japanese fans, whom had specially flown to Korea in order to meet the JYJ member before his enlistment into the army.

On March 16, C-JeS Entertainment shared: “Kim Jaejoong held the fan meeting titled 2015 All of Jaejoong on March 15 at Kyung Hee University’s Grand Peace Palace. Around 2,000 Japanese fans came to Korea in order to meet Kim Jaejoong. This is the biggest number out of all the Japanese fans that headed to Korea in recent days.”

Choosing the concept of an “award ceremony” for the fan meeting, Jaejoong dressed up in an elegant suit with a bow tie, turning himself into Kim Sun Woo, who is the character he starred in the KBS2’s drama Spy. 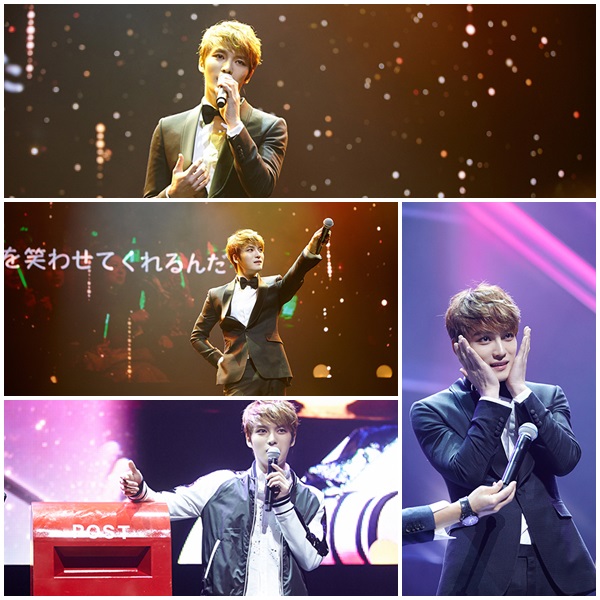 During the fan meeting, Jaejoong showed fans love by performing the tracks from his first solo album One Kiss, I’ll Protect You OST, and more. A touching video message  from JYJ’s Yoochun and Junsu was then played, melting fans’ hearts with the warm support they had for each other.

The last and probably the most wonderful moment from the concert was, when Kim presented his beloved fans with the “Achievement Award” and a short sincere speech: “You’ve all worked hard for 10 years. The fans are the biggest achievement that I’ve made in my life. Thank you.” Jaejoong then gave away candies which he had prepared in advance to his fans as a way to express his gratitude.

After this fan meeting with the Japanese fans, the JYJ member will be holding another one with the Korean fans at Korea University’s Hwa Jeong Gymnasium on March 28 and 29, before serving the conscription.