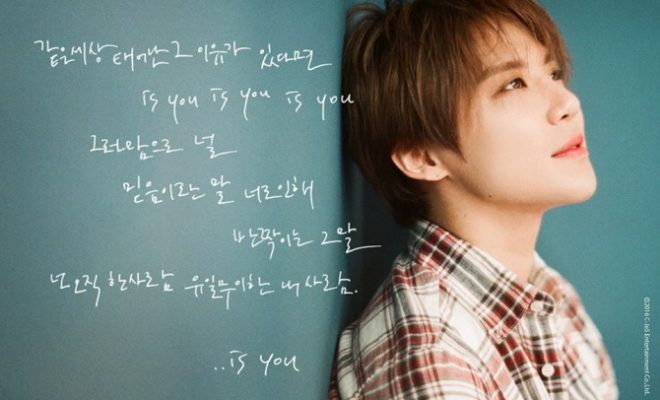 That is a sweet track titled ‘…Is You’ !

Composed by singer-songwriter Sunwoo Jung Ah, …Is You is a love ballad from Junsu’s upcoming fourth album dubbed Xignature. The song will be released before the singer’s album officially hits online music sites in late May.

A photo featuring Junsu and a calligraphy piece for some parts of the track’s lyrics, was posted on JYJ’s official Facebook account today, drawing fans’ attention and curiosity.

The track will be unveiled on May 19, and is said to be “super fascinating.”

Known as a talented singer in the K-pop scene, Junsu has been stealing many fans’ hearts with his sweet sentimental voice. Up to now, the singer has three solo albums in total, namely Tarantallegra (2012), Incredible (2013) and Flower (2015). He also shows his talent in the musical theater scene with many honorable prizes.