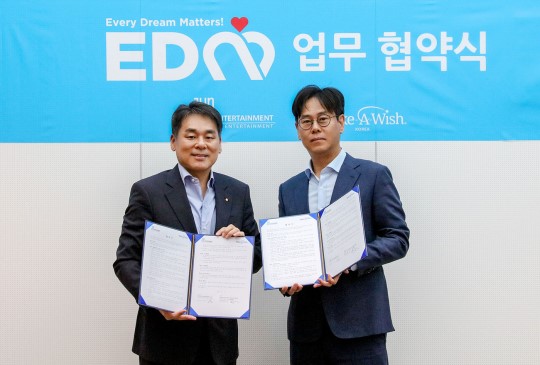 A heartwarming and meaningful project for JYP Nation!

JYP Entertainment has partnered with Make-A-Wish Foundation to carry out their corporate social responsibility especially envisioned for children with critical illnesses.

In the afternoon of June 17, Korea’s leading entertainment company has signed a Memorandum of Understanding (MOU) together with the aforementioned organization to formally announce their meaningful collaboration.

Partnering with the world’s largest wish-fulfillment body, JYP Entertainment aims to bring hope to children who are suffering from intractable diseases such as leukemia, brain tumor, and osteosarcoma.

Additionally, the agency shared the purpose of the partnership by saying, “The entertainment industry is an industry that creates dreams. We hope that helping sick children fulfill their dreams will create a miracle that cures them of their illnesses. Moving forward, JYP will actively carry out projects to create a world where anyone including artists, staff, and fans can dream as big as they want.”

With the motto “Every Dream Matters” (EDM), the agency has already begun its campaign through Keep Spinning, Keep Dreaming with GOT7. JB, Mark, Jackson, Jin Young, Youngjae, BamBam, and Yugyeom were able to gift the sick children with a special meeting during their back-to-back opening concerts at the KSPO Dome last June 15 to 16.

Moreover, the company’s very own founder Park Jin Young will personally attend an event to grant the wishes of critically-ill children later this June.

One of South Korea’s biggest entertainment agencies, JYP Entertainment houses talents including 2PM, GOT7, Twice, Day6, Stray Kids and ITZY among others.