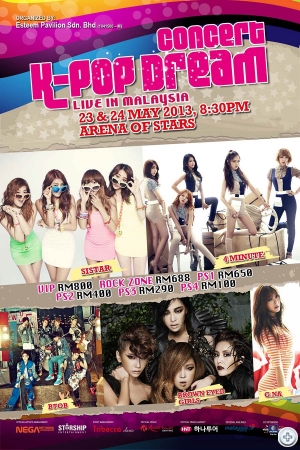 Malaysia, brace your shores for an extravagant K-pop fiesta that is going to happen in the form of the ultimate convergence of K-pop’s biggest names and stars- K-pop Dream Concert!  The 2-day back-to-back event is scheduled to take place on the 23rd and 24th of May, at Genting Highlands’ Arena of Stars at 8.30pm.

The featured star-studded acts on the concert’s lineup include popular girl groups such as SISTAR, 4Minute, and Brown Eyed Girls, while BtoB and G.Na, being the only boy group and soloist respectively, round off the lineup.

Ticket prices are as below (includes RM3 processing fee):

There is a 5% discount for Early Bird ticket purchasers!

Don’t miss this chance to catch your favorite groups’ and artists live!

Stay tuned to hellokpop for more concert updates and details!