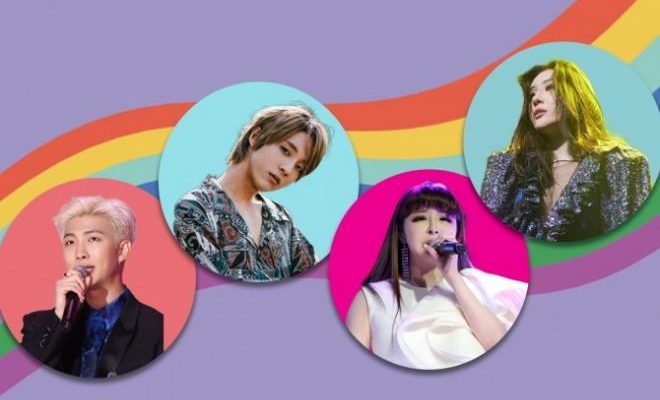 Every country has its conservatives and their attitude on how they view “new” changes to society as a threat to their culture and traditions. Being LGBTQ+ carries the same level of threat in other’s views.

South Korea, too is one of those conservative countries in the modern era that has been most determined to safeguard its culture and tradition by shunning the acceptance of the LGBTQ+ community.

Although many claim that South Korea is now progressing and becoming more open to people and their sexual preferences. But if you are a famous personality coming out will receive backlash that might be unbearable for most. For this very reason, some prefer to stay ambiguous, leaving people curious, while others openly embrace their queerness. Yet if someone like Holland can make it in Korea’s conservative stage, then anyone could find the courage to leave the closet for good!

Several K-pop idols have decided to open up and announce their sexuality without fear of repercussions. Some choosing to open up before debut, while other few years down their career.

On the other hand, some K-pop idols have broken down the stereotypical “feminine” and “masculine” images to elude a more inclusive look. In the list below, we will be looking at and honoring some of the most courageous LGBTQA+ and Androgynous K-pop idols.

Lee Kyung-Eun, better known by her stage name Harisu made history by being the first-ever transgender celebrity not only in Korean by in Asia. Born on February 17, 1975, in a male’s body, Harisu claimed to have never been a man.
Thus, in 1995 she decided to undergo a gender reassignment surgery while being only 20 years old. Her parents supported her decision and even funded the surgery. Earlier in her career, she was an actor that played a few roles prior to undergoing gender reassignment surgery. Few years down the line, she began her career as a singer under TTM entertainment, before which she was an actor and saw a career breakthrough in the year 2001 by appearing in a commercial for a cosmetic brand DoDo.

She went off to marry fellow singer Micky Jung in the year 2007 but got divorced ten years after their marriage in the year 2017. As of currently, Harisu is single.

Also known by his birth name, Go Tae-Seob, Holland is the new generation’s most prominent gay personalities. He debuted as an independent singer under his label Holland Entertainment on January 22, 2018. His stage name is a tribute to Holland (Netherlands), which is the first country to legalize same-sex relationships. He remained personal about his life and only came out to his parents in a written letter before his open confession in an interview.

Holland’s relationship status remains ambiguous. Some believe he is dating his MV co-star Jaeseok, but there is little evidence backing it up.

Som Hye In came out as Bisexual in 2019 after posting a picture of her kissing her girlfriend and making her the first-ever female idol to come out as bisexual. Som Hye In first came in Mnet’s survival contest idol school but left the show early own, later revealing the reason for her exit as her battle against anorexia, depression, anxiety, and sleep disorder.

She released a single in the year 2019 and an album shortly after. Since then, she hasn’t been active. Currently, she is single; Som Hye In broke up with her then-girlfriend only a year after in August of 2020.

Kim Minsung, most famously known as Hansol of the K-pop boy group Topp Dogg is an ex-singer that came out as asexual in an Instagram live in 2017, shortly after which he also announced his departure from the music industry.
Since Hansol is known to be asexual, there has never been any speculation regarding his relationship status.

Jeongyeon (Yoo Jeong-Yeon) is a member of the most popular K-pop girl group Twice, managed by JYP entertainment. Jeongyeon has since pre-debut eluded a fatal androgynous charm by carrying a short bob during her time in JYPxMnet’s survival show SIXTEEN. Following her debut under Twice, she has dressed up fluidly and rocked her short bob for most of her career.

Since dating for K-pop idols is often faced with backlash and considering Jeongyeon is part of Korea’s number one girl group, there haven’t been any relationship revelations.

Probably the world’s most famous K-pop group and boy group of all times, BTS has always challenged gender stereotypes and have openly dressed gender fluidly in their music videos and photoshoots. Their member “V” is often seen dressing up in suits and seen supporting dresses on several occasions.

During the earlier days of their career, two of BTS’s member RM and Suga, faced criticism by fellow underground rappers calling them “girly” for wearing makeup. But this has never stopped them from continuing by singing gender-neutral songs.