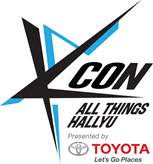 Los Angeles, CA – August 10, 2015 – After three years of exponential growth, KCON 2015 USA presented by Toyota (www.kconusa.com), expanded for the first time to a bi-coastal event; with three days of panels, workshops, and star-studded k-pop concerts held at the Los Angeles Convention Center and Staples Center in LA, in addition to a one day convention and concert held at the Prudential Center in the New York metro area. Over 75,000 fans of Korean entertainment and culture attended KCON 2015 USA, with 58,000 fans converging on the flagship event in LA, and another 17,000 celebrating KCON’s arrival on the east coast.

Once again, the event highlighted the reach of K-pop and Hallyu well beyond the Asian American community, which made up less than half of KCON USA’s attendees – the majority being a multi-cultural representation of K-culture fandom. Additionally, more than 70 percent of KCON USA attendees were female, with nearly 70 percent ages 24 and younger.

The official recap videos for KCON 2015 LA can be found here for KCON LA. Photo and video of the events on both coasts can be accessed here. For more information, please visitwww.kconusa.com.

KCON USA (kconusa.com) is the largest North American convention dedicated to ‘All Things Hallyu’ and includes celebrity panels, autograph sessions, contests, fan workshops, amazing food and star-studded k-pop concerts. The convention launched in 2012 with over 10,000 fans attending and has since grown to over 75,000 fans. KCON is now established as an annual event for American fans of Hallyu and Asian pop culture to meet, providing the largest forum for fans to directly connect with each other as well as artists and professionals from the Korean entertainment industry in person. KCON 2015 USA presented by Toyota was held in both New York and Los Angeles over two weekends and four days, and has been listed by FUSE as one of the “Best Music Festivals of 2015.” Also in 2015, the brand expanded internationally, presenting the first KCON Japan at the Saitama Super Arena on April 22.

CJ E&M produces and distributes content for the broadcast, film, music and live entertainment. Seeking to promote the globalization of Asian pop culture through a strategic “one source, multi-content” approach, the company was formed in 2010 from a merger of leading content makers CJ Media and On Media (broadcast); CJ Entertainment (motion picture); Mnet Media (music); and CJ Internet (game). Through the years, these predecessor firms were instrumental in modernizing as well as winning a following for Korean contents from fans across the world. Headquartered in Seoul and with branches in Asia and the US, CJ E&M currently has over 2,000 employees worldwide and is traded on KOSDAQ under the ticker 130960. For more information, please visit: http://en.cjenm.com.

Mnet America (www.mnetamerica.com) is the leading Asian entertainment network in the U.S. With interest in Asian pop culture on the rise, Mnet America is the premier destination for fans to get an in-depth look at the latest music, film, drama, fashion and lifestyle trends. Through a unique mix of original productions along with programming from Asia, Mnet America has something for everyone – from existing hard core fans to new audiences discovering Asian entertainment for the first time. Mnet America can be found on TV and online, providing English-language programming to viewers via Comcast, Time Warner Cable, Verizon FiOS, Charter and Cox, as well as at mnetamerica.com. It also produces KCON, the largest North American fan convention for ‘All Things Hallyu,’ along with its parent company, CJ E&M.