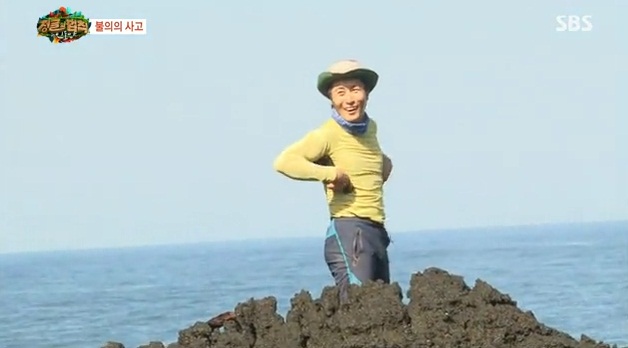 Gagman Kim Byeong Man shed tears and took the blame for the injuries incurred by After School‘s Uee.

Byeong Man tearfully claims it was his fault when he saw Uee got hurt. “It’s my fault for being too unmindful of nature.”

On the July 18 episode of the show Laws of the Jungle, Kim Byeong Man together with Kim Seung Soo, Park Hwi Soon, Kang Ji Seob, Uee, Niel and James were filming in the Indian Ocean.

Kim Byeong Man saw the picturesque view by the rocks getting hit by the waves and went up the slopes to pose for some photos. The effect of the waves made it more inviting to have the memorable shots and the rest of the cast members followed him to the slippery rocks.

When they were forming a line and striking their poses, they were met by a big wave which made Uee fall on the rocks, her head getting a “Z” cut and a shoulder injury. 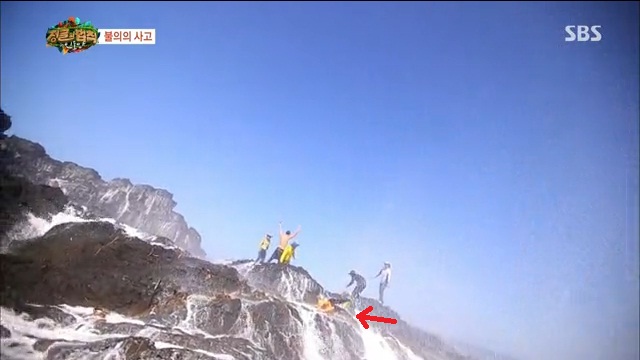 The doctors, who were with the crew, immediately checked what happened to Uee and decided that stitches were needed for her cuts on the head, while taping will do for the minor injury on the shoulders.

While all this happened, Uee managed to keep a smile on her face and felt bad for making the others worry.

Byeong Man couldn’t keep his tears from falling during the interview, as he recalls what happened at the location. He thinks that if it wasn’t for his actions, the unfortunate event may not have occurred and caused hurt to his fellow cast member.

The experienced athletic gagman, also a champion in the sports variety show Let’s Go Dream Team, felt even more sorry for having “the most gentle” member of the show be the victim of the accident.

He further added, “I only thought about my abilities. That is my fault.”